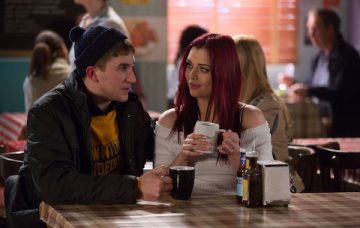 Cheeky chappie Halfway returns to EastEnders next week, and heartwarming scenes will see him reunited with his girlfriend Whitney.

The pair finally get to see each other in the flesh after months of talking to each other on Skype.

But, while this should be their happy ending, Halfway is hiding something and it’s clear that all is not as it should be…

He moves into a room at the Queen Vic, but it quickly becomes apparent that he’s trying to hide an injury – and possibly something more sinister.

Actor Tony Clay, who plays the lovable character, explains that Halfway will start to “unravel” on his return.

He says: “Something’s changed and you start to see him unravel. On the surface, he’s being quite jokey but you begin to wonder what he’s trying to hide.”

He also hints that the relationship with his brother is complicated too.

Referring to the casting of Stuart (Ricky Champ) as his brother – who is due to join the soap a few weeks after Halfway – Tony says: “Halfway’s brother brings a new dynamic to it. It’s really good to have that coming up.

“Stuart is definitely the brother who wears the trousers and Halfway looks up to him. But you’ll soon get a sense that something isn’t right between them.”

Halfway was only supposed to be in the soap for two months originally, but fans loved him so much, he was persuaded to stay.

Describing it as a ‘privilege’, Tony added: “When I initially signed, it was only for two months. But from what I’ve been told, there was quite a nice reaction online from people who’d watched it.

“And then I got a phone call asking if I’d be willing to come back. So I just felt really privileged. I’m now a part of the history of this show, which is really brilliant.”

Are you looking forward to having Halfway back in Walford? Leave us a comment on our Facebook page @EntertainmentDailyFix and let us know what you think!