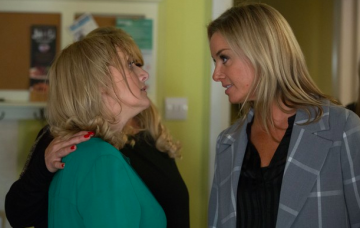 There is an almighty showdown in the Square tonight

Mel Owen goes head to head with Michelle Fowler in EastEnders tonight after her son Hunter makes a terrible accusation.

And it looks like her past is coming back to haunt her as Mel angrily accuses her of trying to seduce her teenage son.

Michelle had a controversial relationship with one of her students in America called Preston, who followed her to Walford last year.

She can’t shake her reputation as a predator when Mel attacks her after Hunter makes claims she tried to kiss him.

It comes after Michelle, who has agreed to tutor the schoolboy, catches him in a compromising position with girlfriend Louise Mitchell, who he’s not supposed to be seeing.

They beg her not to say anything but Michelle approaches Mel and tells her she doesn’t think home tutoring is for her after all.

Mel then questions Hunter about what’s happened to make Michelle change her mind and – not wanting to admit he was with Lou – he tells his mum that Michelle made a move on him.

A furious Mel then storms over to confront Michelle and the pair end up having a furious showdown.

But will Michelle be able to prove her innocence or will her reputation follow her as long as she stays in Walford?

Do you think Michelle should leave Walford? Let us know by commenting on our Facebook page @EntertainmentDailyFix!

EastEnders is on BBC One tonight at 8pm