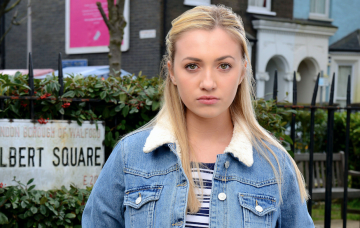 EastEnders SPOILER: Louise Michell and Tiffany Butcher have an almighty fight in the Square

There’s going to be drama on the Square next week when Tiffany Butcher and Louise Mitchell have a huge fight.

The row happens after Tiffany stirs up trouble between Louise and Hunter Owen, who are trying to keep their forbidden romance under the radar of Louise’s dad Phil Mitchell.

After Louise is nasty to Bernadette Taylor, Tiffany decides to get revenge on her friend’s behalf and comes up with a plan that’s bound to land Louise in trouble.

Read more: EastEnders SPOILER: Max Branning is coming back and he’s got a HUGE new storyline

Catching Louise and Hunter getting passionate, Tiff takes a sneaky picture and decides to show Louise who is boss by sharing it online.

When Louise realises what’s happened, she sees red – knowing that it won’t be long before her dad knows she’s still seeing Hunter in secret.

Confronting Tiffany in the middle of the Square, the pair have an almightily face-off, and even Sharon and Whitney join in for some support, too.

Will Tiffany get away with this latest social media gaff? She’s certainly one for letting her phone get her in trouble as she also sparks another drama with her social media obsession next week.

But the big question is, how long will it take for Phil to see the photo?

We wonder if there will be a baseball bat involved this time?

EastEnders is set to air these scenes on Monday 23rd April at 8pm.