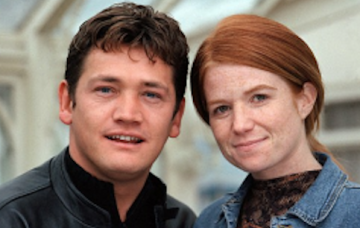 Are the pair heading back to Walford?

Former EastEnders actress Patsy Palmer, better known to soap fans as the legendary Bianca Jackson, has got fans excited after sharing a picture of her with former co-star Sid Owen.

Ricky and Bianca are still one of EastEnders fans’ favourite couples, despite the fact they haven’t been seen on screen together since 2012 when Ricky left the soap, but Patsy has revealed that off screen, the pair are the best of friends.

The actress, who now lives in Sunny LA with her husband and their children, posted a picture of her laughing along with Sid Owen, hinting to fans that the pair of them were going to be meeting up again soon.

She told her fans: “Looking forward to seeing this lunatic next week @sidowen, friends for 30 years, long time.”

Patsy didn’t mention whether their catch up was purely social, or whether they could potentially be working together again after all this time.

However, soap fans everywhere will be keeping their fingers crossed that we might see Ricky and Bianca back in Walford one day.

With their daughter Tiffany back on the scene, surely now is the perfect time for the pair to come back to their old stomping ground?

Bianca has been mentioned a few times on screen since Tiff’s return… is this paving the way for a comeback? We hope so!