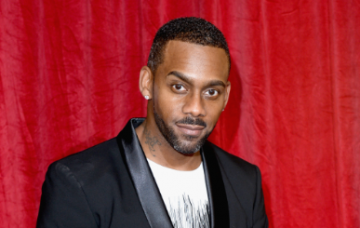 He once contemplated taking his own life

EastEnders favourite Richard Blackwood has revealed he contemplated suicide as he was hit with bankruptcy.

The actor – who plays troubled Vincent Hubbard – battled financial problems back in 2003.

And the impact of losing everything pushed him to the brink, he’s told this week’s OK! magazine.

“I got blacklisted by the industry – no work was coming. Everyone turned against me,” the 45-year-revealed.

“I’m such a strong person and looking back it’s hard to believe I was in that place. But it showed me that things can really accumulate and break you down.

“I was in a place where I was ready to bounce back. I’d hit the floor so I couldn’t go any lower.

“I always try to get back up and win. At that moment, I definitely lost myself but I got reminded of who I am.”

Richard has admitted that leaving the popular soap was a scary prospect.

He also told the mag: ” I have a lot of respect for EastEnders – they took the risk when they cast me.”

His exit was unconventional, and left fans wondering what had happened to the criminal-turned-police-informer.

On his uppers since Aidan bought the Albert for £1, Vincent had gone back to his old police informer ways in his desperation for cash.

But when Phil got wise to what he was up to, he made a phone call to Aidan and things started to look bleak for poor Vincent.

Frantically he packed a bag, and told Kim he’d booked them a special break.

But bolshy Kim dug her heels in and demanded to know waht was going on.

“I want to know the truth, Vincent,” she said.

“The money I told you about, it’s not going to be enough to get us out of trouble,” he said. “We’re going to lose everything, the house, the lot…”

But Phil had given Aidan’s hired thugs – and corrupt cop DCI Alsworth – the nod to rough Vincent up.

“Nothing too strong,” he said. “Just scare him.”

But  it seemed they’d gone a step further when they bundled him into a car, speeded off to a deserted site, then produced a gun.

Vincent gave a little nod, and a smile – and the screen went black at the end of the episode.

It was dramatic, all right, but fans were NOT impressed at such a vague ending for a fave character.

Do you think Vincent is dead? Let us know by commenting on our Facebook page @EntertainmentDailyFix!

EastEnders airs on Mondays and Fridays at 8pm and Tuesdays and Thursdays at 7.30pm on BBC One