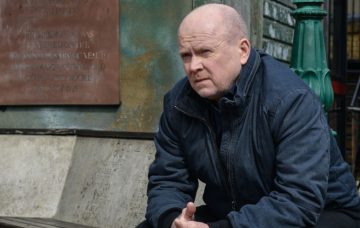 There's no love lost between these two

Next week the mechanic has an idea about getting one over on his arch enemy – and it involves hapless Robbie Jackson.

Robbie is chuffed when Max’s new wife Rainie offers him a commission only job at the newly opened car lot and he’s even more chuffed when he is actually pretty good at selling motors.

He’s a bit shocked when Rainie starts flirting with him and suggests they find some other way to pay him his commission.

Robbie decides to take the cash.

But when Phil spots Robbie working at the car lot approaches him and asks him for a favour.

Later, Robbie sneaks into the car lot on Phil’s instruction and is still there when Max returns – will he catch him?

Max has to rush off as he has a meeting with Rainie and a social worker about his granddaughter, baby Abi.

When Max returns to the office later, he’s shocked to find Phil sat at his desk with a fistful of paperwork.

What has Phil discovered?

And how will Max react?

What do you think Phil’s found out? Let us know what you think by leaving us a comment on our Facebook page @EntertainmentDailyFix!