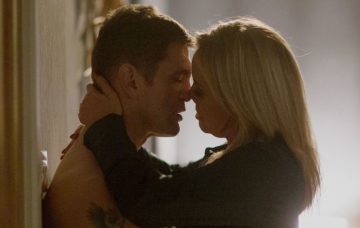 Albert Square was a hive of, ahem, activity!

BBC viewers were in for a shock last night as several EastEnders residents got a bit frisky.

And while some complained it put them off their meat and two veg supper, many others appreciated the sight of a well-toned man with very little clothing on…

What a way to make a comeback, Kush!

In hilarious scenes shown on Thursday night (3 May), easy-on-the-eye Kush returned to Walford after time away in Dubai and was excited to see his girlfriend Denise.

And we mean very excited!

Thinking she was in the shower, he stripped off and planned to jump in with her – only when he flung back the shower curtain, it wasn’t Denise, but her sister Kim instead!

One wrote: “The shower scene as got to be the best part of EastEnders tonight , I didn’t see that coming what kush did to Kim Lol.”

Another said they “enjoyed the Kush strip”.

Dear Kush, I have left the front door open and will now be in the shower 24/7 til I have to be at work on Monday. #eastenders

Kush is so handsome <3 #EastEnders

Later in the episode, Jack and Mel finally got it on and ended up sleeping together.

And fans seemed to be quite happy with the pairing!

Another wrote: “I think everyone saw that coming! But thanks for the topless Jack scene and the topless Kush scene! Much appreciated”

Great! All we wanted for a Thursday evening was a Jack and Mel sex scene! BBC should do a warning before that stuff! #EastEnders

Jack and Mel. That was very intimate 😂😂#EastEnders pic.twitter.com/Ih1ww0hDsy

Yep, it was an eventful night in Walford, with very few viewers complaining…

Only time will tell if fans will ever get to see Kush’s bum, or whether Jack and Mel decide to make their growing attraction official.