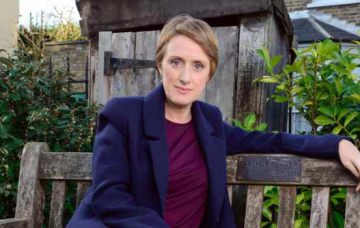 Michelle Fowler has left Walford in a cloud of controversy – much like her arrival.

BBC viewers saw the legendary EastEnders character flee the Square after being accused of sleeping with teenager Hunter.

Something she wasn’t actually guilty of…

Earlier this week, troublemaking Hunter had told his mum Mel that Michelle had tried to seduce him. But really he was setting her up, after Michelle caught him in a compromising position with Louise…

Michelle was due to tutor 15-year-old Hunter, when she walked in on him in a state of undress with Louise.

After the teens pleaded with Michelle not to tell their parents, she agreed to keep quiet – so long as they promised to end their liaison.

But we all know that Hunter wouldn’t settle for that.

Later scenes show Michelle recoil in horror as Mel accused her of trying it on with her son. And, it seems her fate was sealed when even her best pal Sharon wasn’t sure whether to believe her.

Sharon pointed out that Michelle had “form” after she had a secret affair with student Preston Cooper, 17, which was exposed to the rest of the Square last year.

As Michelle made the difficult decision to leave the Square before the police came knocking, fans spoke their minds on Twitter – with most happy to see her go…

All the schoolboys can come out now. Michelle fowler has left Walford #eastenders

The character of Michelle Fowler has been ruined forever. I’m so angry #EastEnders

Michelle Fowler's departure from #Eastenders was not because of recasting OR even Jenna Russell’s ability as an actor. It was because of rubbish storylining, and the poor management of Sean O’Connor.

I'm really, really disappointed in the handling of Michelle Fowler. Such potential for so many story lines and we got stuck with this hot mess. #EastEnders

Sorry to see Michelle Fowler leave #eastenders just 16 months after returning, @jennarusselluk did a fantastic job but let down with poor writing and a lack of storylines. Jenna will ace it in her next venture!

Bye Michelle Fowler, we will miss you. @jennarusselluk #EastEnders

And no one sees you as Michelle Fowler #EastEnders

All that hype with Michelle Fowler's return and it's been a total waste. I hope she is brought back in a few years and try it again. I know not everyone loved Jenna's portrayal but I personally loved the scenes between her and Sharon. #eastenders @bbceastenders

One blasted: “Michelle Fowler…the end of an error. Her return was a total disaster.”

While another disagreed, arguing: “Michelle Fowler’s departure from #EastEnders was not because of recasting OR even Jenna Russell’s ability as an actor. It was because of rubbish storylining, and the poor management of Sean O’Connor.”

A third said: “All that hype with Michelle Fowler’s return and it’s been a total waste. I hope she is brought back in a few years and try it again. I know not everyone loved Jenna’s portrayal but I personally loved the scenes between her and Sharon.”

Last night’s episode of the soap (Tuesday 17 April) saw her say goodbye to best mate Sharon, telling her that she was going back to America to see kids Mark and Vicki before going travelling.

Michelle (played by Susan Tully at the time) was one of the original EastEnders characters, but first left the Square in 1995 to start a new life in the US.

Actress Jenna Russell joined the cast as Michelle in December 2016, but many fans struggled to warm to character again.

Will Michelle be back again? The door has been left open…

What do you think of Michelle’s exit? Leave us a comment on our Facebook page @EntertainmentDailyFix and let us know what you think!