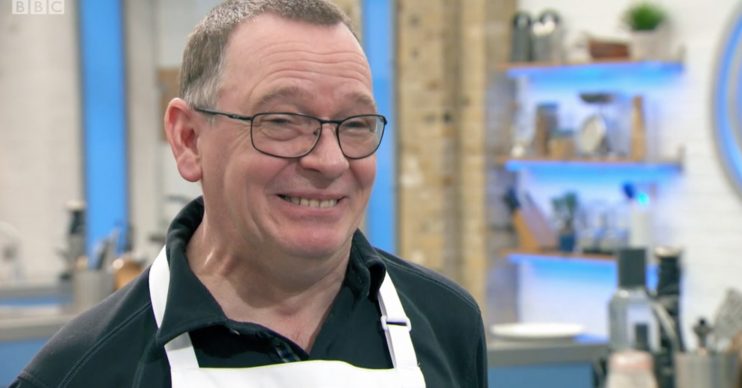 Not a great start!

During that time, Ian has owned a chippy, a cafe and a restaurant.

So when he appeared on Celebrity MasterChef last night (23.9.19) hopes were high that he could cook up a storm, but fans were stunned when he served RAW rice to judges John Torode and Gregg Wallace.

As he started to chop and stir his opening entry, co-host Gregg Wallace asked him why he he had decided to take part in the competition.

“Because I love food. How good at cooking it I have no idea,” he replied enthusiastically.

Gregg then said: “Hold on, in Albert Square, you’ve owned a caff.”

“Yeah, I know,” Adam responded. “But the props boys do a wonderful job. I’m only as good a chef as the props boy that day.”

In the opening curry-themed round, Adam made a prawn, tomato and coconut curry with brown rice and a chapati.

Even though the curry was well received, Gregg grimaced as he took a mouthful of

He redeemed himself with his second dish: Iberico pork, parnsip three ways, crispy bacon crumb and carrot and ginger sauce.

Gregg called it modern and bold with the parsnip puree garnering a ‘delicious’ comment.

Fans were quick to respond to Adam’s appearance on Twitter.

Finding #MasterChefCelebrity a little bit unfair. Ian Beale has been in the restaurant game for years.

Ian Beale is on Celebrity Masterchef but they aren't making him cook fish and chips. Huge missed opportunity.

If Ian Beale isn't made to cook fish and chips in this year's Celebrity MasterChef, what is the point of life?

The irony of an actor whose character owns a chip shop was not lost on some fans, but one fan commented on the rice debacle…

“Anyone else looking at Ian Beale on #MasterChefCelebrity thinking why the hell can’t you cook when you own two restaurants,’ one wrote, using a cry-laughter emoji.