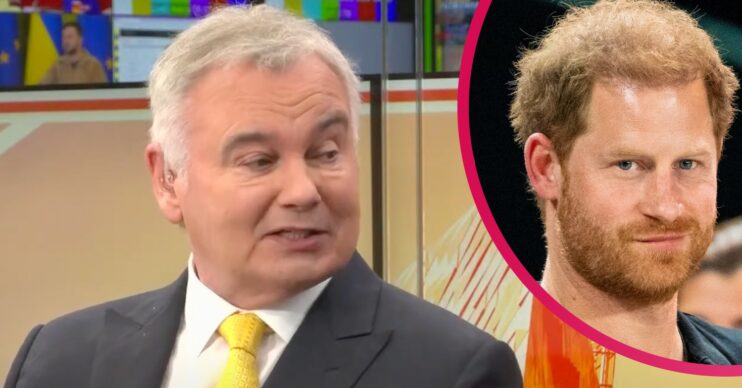 Eamonn's comments have proven to be controversial

Eamonn Holmes has come under fire on Twitter for comments he made about Prince Harry and Meghan Markle recently.

The 62-year-old’s remarks came during a debate on the royal couple on GB News yesterday (Wednesday, April 20).

During yesterday’s edition of GB News, Eamonn, his co-host Isabel Webster, as well as some guests, discussed Prince Harry’s recent meeting with the Queen. It was during this discussion that Eamonn made the comments he’s currently under fire for.

Read more: Eamonn Holmes says Prince Harry ‘will hate being like his father’ as he spots similarity

“The Queen only becomes important to him, only because he has to see the Queen for his credibility on Netflix,” he said.

Eamonn agreed: “Got to be photographed, got to be on that balcony, he’s bringing a book out where he’s slagging off Camilla and maybe William and his father.”

“Why wouldn’t they just throw him over the balcony and her with him?” he grumbled, causing Isabel to laugh.

Viewers took to Twitter to slam the 62-year-old’s comments about the Duke of Sussex.

“Everyone is entitled to an opinion, especially on an interview made for public consumption. But you know what isn’t acceptable? Vile ‘commentary’ that only serves to incite violence and hate,” royal author Omid Scobie tweeted.

“This man is utterly disgusting… how he can incite violence and the panel laugh is beyond me,” another wrote.

One wrote: “I hope more people report this to Ofcom—no media person should be able to say such things.”

The 62-year-old wasn’t done there though! The Irish presenter launched another attack at the Duke of Sussex on GB News today (Thursday, April 21) too.

Eamonn and his guests took issue with these comments on today’s edition of the show. David Wooding said: “What’s funny about this Eamonn is the Queen has been on the throne for 70 years, it’s her Platinum Jubilee this year.

“She’s quite capable of looking after herself.” He then went on to say that Harry can’t look after himself.

“David, you’re right. He isn’t capable of looking after himself because he needs people psychologically to reassure him,” Eamonn said.

Eamonn continued, saying: “He needs people to do his bidding around him, people who just make things happen, fixers, and they’re all around.

“He is probably quite incapable of lots of things.”

ED! has contacted reps for Eamonn and GB News for comment.

Eamonn is on GB News weekdays from 6am.