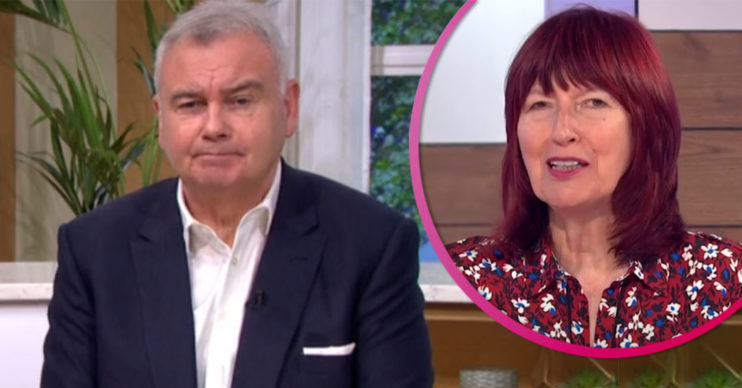 Eamonn Holmes was told off for making a joke about Janet Street Porter’s age on This Morning today.

The show was linking to the Loose Women studio to find out what was coming up on the programme.

However, Eamonn took the opportunity to poke fun at the loose ladies as they started discussing ages.

The pair were just about to talk to Liz Kershaw and Nick Ferrari about today’s news headlines.

Liz spoke about turning 62 on Thursday (July 30) and Eamonn and Ruth were stunned by how great she looked.

Ruth then asked: “I wonder how old the Loose Women are collectively, what do you reckon?”

He cheekily added: Depends if Janet’s on or not.”

Ranvir Singh said: “We can hear you by the way!”

After Ranvir explained what was coming up on the programme, Eamonn said: “What a line-up Ruth. What a line-up.”

You’re in the hole and you can’t dig yourself out.

However, Janet hit back: “I’m not happy about the age thing.”

Eamonn said: “But if I had known you were there, I wouldn’t have said it.”

Janet told him: “No Eamonn, you’re in the hole and you can’t dig yourself out. Too late now.”

'You're in the hole, you can't dig yourself out!'

Eamonn said: “I should have said Gloria [Hunniford] shouldn’t have I really.”

After that, Ruth told him: “Yeah stop now, stop now.”

Meanwhile, earlier in the show, viewers were in hysterics over Eamonn’s relationship advice to a caller.

Lucy phoned in to complain that her partner hasn’t yet proposed to her.

She said her partner’s recent excuse for not getting married was that they’re paying for a new roof.

Lucy said: “I don’t want to push him too far but also I’m not going to propose.”

Eamonn told her: “Lucy, how about pushing him off the roof?” to which Ruth said: “Stop it!”

Viewers were amused by Eamonn’s advice as one person writing on Twitter: “Great advice ‘shove him of the roof’… love the relationship advice.”

In addition, another said: “Pushing him off the roof,” followed by laughing face emojis.

After that, a third added: “I love @EamonnHolmes push him off the roof.”

Pushing him off the roof 😂😂 #ThisMorning

#thismorning I love @EamonnHolmes push him off the roof.