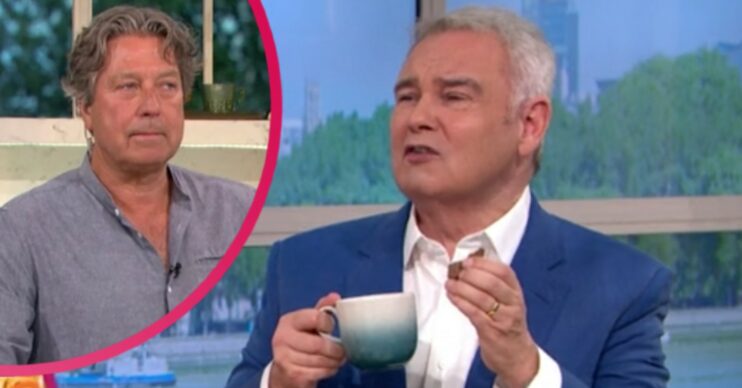 Eamonn Holmes shocked This Morning viewers today (August 6), as he made a rude remark about John Torode.

The MasterChef star, 56, appeared on the ITV show for one of his regular cooking segments.

But ahead of the live demonstration, John found himself in a serious biscuit discussion with Eamonn and Ruth Langsford.

It came as Eamonn and Ruth, both 61, were testing Morrison’s latest Bourbon Cream biscuit.

The tasty treat is a mash-up of a Custard Cream and a traditional Bourbon.

As the married pair sampled the snack, John explained his biscuit eating technique with viewers.

Read more: Eamonn Holmes ‘quite depressed’ about health problems as he fears he won’t get better

He shared: “See it’s not about the combination of the biscuit for me, it’s about how you eat it.

He replied: “You’re such a dirty pig. Imagine living with you.

“You’re like the sort of child that would try to lick your plate clean.”

Thankfully, John saw the funny side to Eamonn’s remark as he began to laugh hysterically.

But it appears viewers at home were shocked over the comment.

Taking to Twitter, one complained: “#ThisMorning How can @EamonnHolmes call John a pig when he is chumping through a biscuit with his mouth open!”

One added: “You’re such a dirty pig [laughing emoji] don’t ever change Eamonn!”

“Got to love Eamonn,”a second shared, while another added: “Add this to Eamonn Holmes’ best bits!”

Later on in the show, Eamonn went on to discuss his own health struggles.

The presenter has previously spoke about his agony after dealing with chronic pain in recent months.

During an interview with former rugby player Ed Jackson, he said: “It’s been going on for three months and I get quite depressed about it sometimes and I think, ‘This is not going to get better.’

“My friend, how humbled am I reading your story and listening to you because your prognosis was, that’s it!”