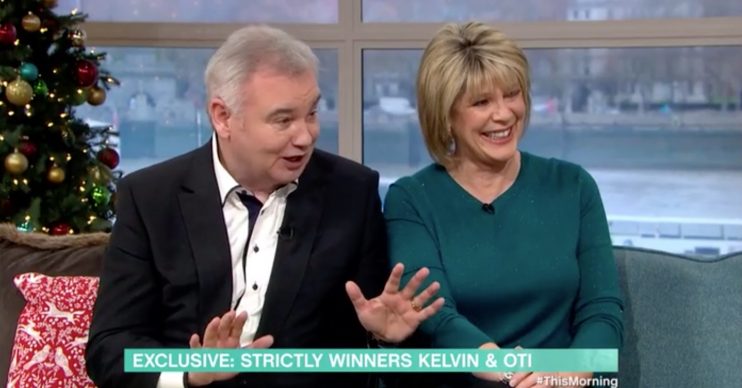 Oti begged him to do it

TV’s Eamonn Holmes has revealed that Strictly Come Dancing winner Oti Mabuse has ‘begged’ him to be her dance partner on the show, and that it could have been him instead of Kelvin Fletcher waltzing around the dancefloor.

Oti, 29, and former Emmerdale actor Kelvin, 35, appeared on This Morning today (16.12.19) when Eamonn dropped the bombshell.

Kelvin and Oti won the Glitterball on Saturday night (14.12.19) after beating off stiff competition in the form of Karim Zeroual and Amy Dowden, and EastEnders actress Emma Barton and Anton Du Beke.

But talking about the fact Kelvin was a late replacement for injured Jamie Laing, Eamonn said: “This woman has begged me – BEGGED me – and she promised me that I would be her partner.”

I turned it down. That could have been me sitting there.

“I turned it down. That could have been me sitting there,” he continued.

“For five years he’s said no to me!” Oti erupted into laughter.

Congratulations to @kelvin_fletcher and @OtiMabuse you guys rocked it!! Thank god for my broken foot #StrictlyFinal

After Kelvin and Oti’s win on Saturday night, Made In Chelsea’s Jamie took to Twitter to congratulate the man who replaced him in the line-up.

Jamie, 31, suffered a serious foot injury during rehearsals and Kelvin stepped in at the last minute.

He said: “Congratulations to @kelvin_fletcher and @OtiMabuse you guys rocked it!! Thank god for my broken foot.”

Kelvin and Oti also shared emotional tributes on Instagram after their victory.

“This is been a dream come true,” Oti added on her Instagram feed.