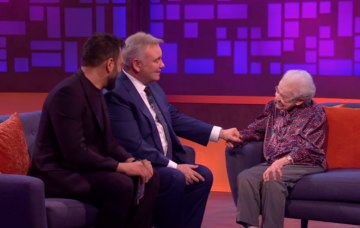 Eamonn Holmes helps 92-year-old scam victim get £7,500 back thanks to secret millionaire

Viewers in tears as Betty gets her money back

A kind-hearted millionaire was so moved by a frail 92-year-old  conned by telephone fraudsters that he has given her the £7,500 she lost.

Entrepreneur Joe Fournier was backstage during last week’s Do the Right Thing with Eamonn and Ruth when he heard Betty’s agonising story.

And Channel 5 viewers were moved to tears when Eamonn Holmes, who hosts the show with wife Ruth Langsford, surprised the pensioner by introducing her to Joe on last night’s show.

92 year old Betty lost 7.5 k to conmen. But all was not lost. There are still good people in The World like Joe – @JoeFournierClub#DoTheRightThing tonight at 9pm on Channel 5 Please watch if you can. pic.twitter.com/RXJ9usKlwW

The multi-millionaire told her: “I was sitting backstage last week and I heard your story and I just couldn’t let it go.

“I haven’t really been able to sleep thinking about what those people did to you and I found out the banks wouldn’t give you the money back.

“That made me extremely sad and I thought it was very unfair. So I wanted to rewrite the script and personally give you back the £7,500 that you lost.”

Shaking her head in disbelief, Betty said: “I’m overwhelmed. For every vile person that has no conscience about how they treat their fellow beings, there is generally a multitude of people who are good and kind and generous.”

Viewers were outraged last week when Betty told how she became the victim of a “vishing” scam. But they were overjoyed at Joe’s generosity.

@RuthieeL @EamonnHolmes In tears watching the lovely Betty. How wonderful that there are kind caring people around. Love your show! #DoTheRightThing

Made up for Betty and the fella that gave her back £7.5k is a diamond #DoTheRightThing

Watching #DoTheRightThing with @EamonnHolmes and @RuthieeL Joe just made my cry, heart of gold that man

This guy is incredible! So pleased for Betty! #DoTheRightThing

* Do the Right Thing with Eamonn and Ruth concludes next Thursday at 10pm on Channel 5.