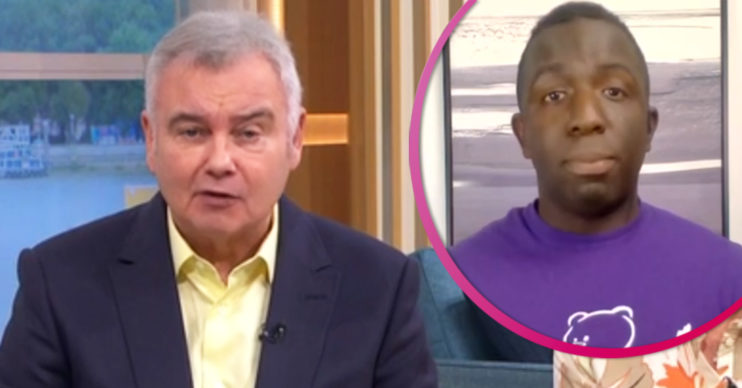 Eamonn Holmes criticised for interview with This Morning guest over ‘Rule Britannia!’ controversy

Eamonn Holmes has been accused of being “condescending” towards a This Morning guest today.

Femi Oluwole and Nigel Farage discussed the BBC’s decision to ditch the lyrics of Rule, Britannia! and Land of Hope and Glory at this year’s Last Night of the Proms.

In recent days, the patriotic songs have been at the centre of a heated row due to their lyrics’ perceived association with colonialism and slavery.

Speaking on This Morning, Britain Passionate political campaigner Femi said he thinks the songs should be banned.

Eamonn asked: “From your point of view, and for the audience at home, what is your particular problem with the lyrics of Rule, Britannia!?”

Femi replied: “As for that song specifically, it was written at a time that the UK was actively engaged in the slave trade.

“They were singing about how we ourselves will never be slaves.”

Eamonn then asked leader of the Brexit Party Mr Farage what his thoughts were.

Mr Farage said: “The BBC has got this hopelessly wrong. The song Rule, Britannia! is about the fight for liberty.

“Rather than constantly attacking everything this country has every stood for, can we agree that it’s a very good thing that Britain did rule the way.

Not a fair interview, Eamonn coming across badly here!

“For 50 years in the 1800s, it was the British Navy that got rid of the slave trade when all the other countries wanted to continue it.”

When asked which lyrics he thinks should be banned, Femi said: “The line about how our bounds are wider set still, the idea of it increasing our territory.

“The idea of the UK as an empire constantly increasing its territory.”

Eamonn then spoke about the Irish national anthem, which uses the word “slave” in one line.

He asked Femi: “Do you have an issue with the word slave used in the Irish national anthem?”

What did Femi reply?

Femi replied: “You need to explain the context of what they meant by that.”

Eamonn said: “I’m asking you do you have an explanation of the context of it? Every time the ‘s’ word seems to be used, you have an issue with it.”

Femi hit back: “It’s an issue in the context of Rule, Britannia! on the basis that we were bragging about how we were in a position of enslaving other countries.”

Viewers criticised the interview, with some people branding it “unfair”.

One person said on Twitter: “Eamonn Holmes please stop, this is excruciating, asking a black man why he takes issue with the word ‘slave’???

“In that condescending tone too.”

Eamonn Holmes please stop, this is excruciating, asking a black man why he takes issue with the word ‘slave’ ??? In that condescending tone too #ThisMorning

In addition, another wrote: “Seriously don’t like the way Eamonn is shutting Femi down and disparaging his comments.”

After that, a third added: “Not a fair interview, Eamonn coming across badly here! Not allowing Femi a chance to explain.”

Not a fair interview, Eamonn coming across badly here! Not allowing Femi a chance to explain. #ThisMorning

Wait what? Eamonn asking Femi why he’s offended by the ‘S’ word? #thismorning

Do you think Rule, Britannia! is offensive? Leave us a comment on our Facebook page @EntertainmentDailyFix and let us know.