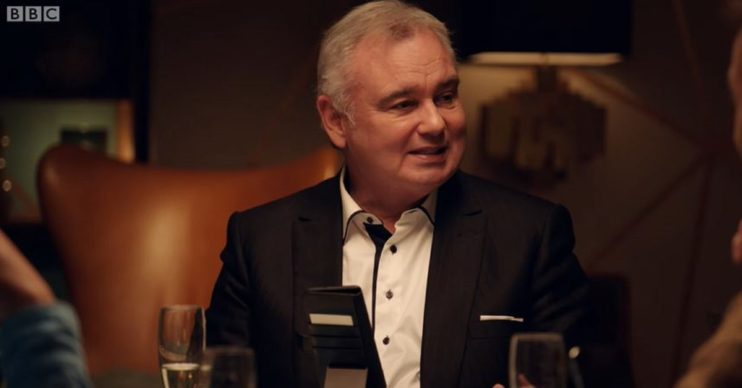 I’ll Get This: ﻿Eamonn Holmes’ controversial 5G comments come back to haunt him

Controversial comments made by presenter Eamonn Holmes came back to haunt him as he featured among the celebrities on BBC Two show I’ll Get This.

Read more: This Morning viewer breaks down as she reveals she can’t visit husband’s grave during pandemic

As the show aired and the food, drink and laughs flowed, many viewers couldn’t help recalling something Eamonn said earlier this month that caused a stir.

During an episode of This Morning, which he hosts on Fridays with his wife and co-host Ruth Langsford, Eamonn addressed theories that 5G technology might in some way be linked to the coronavirus pandemic.

Some conspiracy theorists believe the symptoms of COVID-19 are caused by electromagnetic radiation coming from 5G towers, rather than a virus. That’s despite information debunking such claims being widespread online.

Speaking about the theory on This Morning, Eamonn said: “What I don’t accept is mainstream media immediately slapping that down as not true when they don’t know it’s not true.

“No one should attack or damage or do anything like that. But it’s very easy to say it is not true because it suits the state narrative. That’s all I would say, as someone with an inquiring mind.”

But Dr Simon Clarke, University of Reading-based associate professor in cellular microbiology, commented, as reported by BBC News: “Electromagnetic waves are one thing, viruses are another, and you can’t get a virus off a phone mast.”

Regulator Ofcom eventually got involved after receiving hundreds of complaints. Later, it said it had issued ‘guidance’ to ITV.

Is that a 5G phone, Eamonn?

The day after he made the comments, Eamonn responded to the backlash on This Morning and said there’s no link between coronavirus and 5G.

But he insisted many people are “looking for answers and that’s simply what I was trying to do”.

After his appearance on I’ll Get This last night, some viewers at home couldn’t let the comments slide.

On Twitter, one asked: “Did he check for 5G signals before he entered that restaurant?”

Another wrote: “Is that a 5G phone, Eamonn? #IllGetThis.”

A third wrote: “I was half expecting Eamonn’s picture to be of a 5G coronavirus tower. #IllGetThis.”

#IllGetThis
Oh, look! It's Eamonn Holmes on the evil MSM again!
Did he check for 5G signals before he entered that restaurant? pic.twitter.com/vGWCTbcUEn

Is that a 5g phone, Eamonn? #IllGetThis

I was half-expecting Eamonn’s picture to be of a 5G Coronavirus tower. #IllGetThis

Someone else tweeted, with a winking emoji: “I hope Eamonn Holmes’ phone isn’t on the 5G network #IllGetThis.”

A fifth joked: “‘Does the starter have any 5G in it?’ #IllGetThis.”

“Does the starter have any 5G in it?” #IllGetThis