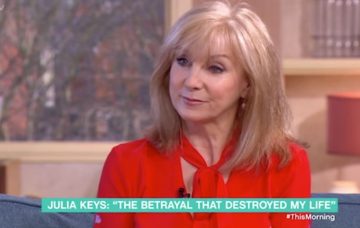 Claims he had his "mind made up"

Richard Keys’ wife Julia has spoken out about her interview with Eamonn Holmes, claiming he made her feel attacked.

Julia appeared on This Morning to talk about the failure of her marriage to football pundit Richard, in the wake of his infidelity.

Julia has now opened up about her feelings about the interview, telling the Mail On Sunday Eamonn made her feel like she was on trial.

“It was as if I was being blamed for Richard’s affair, which is not what I had expected. The implication was my husband’s infidelity was my fault,” she said.

Julia’s new book, The MANScript, co-written with Jacqui Coles, aims to unpack the patterns of infidelity, in order to help people rebuild.

During the TV interview about the book, Eamonn postured: “I would say this to you on behalf of men: for men to cheat, there’s got to be another woman involved.

“So there’s no point really sitting her saying all men are pigs.”

Julia was there to discuss one man who had cheated on her, not mean as a whole, she now argues.

“Of course I was also willing to discuss my private life because much of it is in the public eye,” Julia has said. “But I felt Eamonn came into the interview with his mind made up.”

She continued: “Eamonn’s hostility made me feel as if both my professional credibility and my personal integrity were being challenged.”

Richard apparently began an affair after with his his adult daughter’s friend, Lucie, after his work took him to Qatar; it was discovered after Julia found messages from the young woman.

She described the incident on Loose Women at the time, saying that after weeks of suspicion, she saw a message come through and, pretending to be Richard, replied to the texts so she could be sure it was an affair.

She blasted Eamonn’s interview techniques as a way of making a betrayed partner feel guilty and disempowered.

Eamonn is yet to reply to her comments.

What did you think of the interview? Visit our Facebook page @EntertainmentDailyFix and let us know!