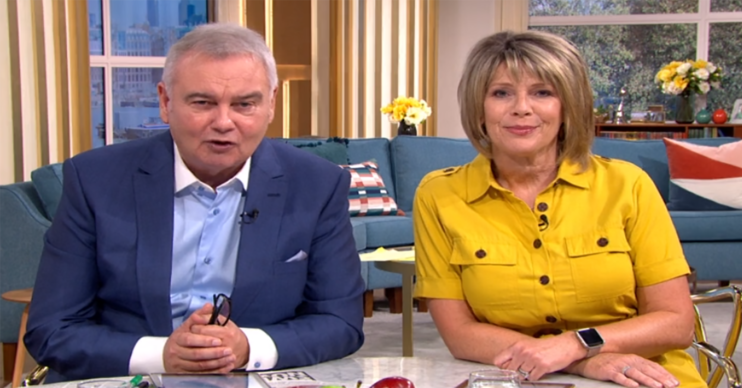 They will be hosting This Morning over the summer

Ruth Langsford and Eamonn Holmes are taking a break from This Morning until the summer.

The husband and wife duo usually host the show on Fridays and during half term and the summer breaks whilst Holly Willoughby and Phillip Schofield take time off.

Eamonn and Ruth will be hosting over the summer when Holly and Phil go on their break in a couple of weeks.

However, until then, Ruth and Eamonn are going to be enjoying some time off.

Eamonn said: “Thank you for watching, we’ll be back doing this all over again for the summer, in a couple of weeks.

“We’ll be back then. Goodbye.”

Meanwhile, earlier in the programme, Ruth and Eamonn were in hysterics as they watched Josie Gibson on a theme park ride.

Josie was at LEGOLAND Windsor Resort and went on a pirate ship ride – something producers cheekily said she wouldn’t have to do.

She spoke to Operations Director Karen as they sat on the ride about the coronavirus safety measures they’ve put in place ahead of reopening tomorrow (July 4).

However, the ride started moving as Josie screamed.

She shouted: “Why do they do it to me Karen?! Stop! Why do you do this?

“Karen, I’m so sorry about that because I’m trying to conduct a professional interview with you here.

We’ll be back doing this all over again for the summer, in a couple of weeks.

“They told me they wouldn’t start the ride, they told me it would be smooth sailing and they completely lied to me!”

As the ride stopped, Ruth said: “Poor Josie! She should know that we’re going to do that to her now shouldn’t she?

“Not in a million years would you get me on something like that.”

Read more: Josie Gibson accuses This Morning bosses of ‘lying’ to her as she screams on theme park ride

Viewers were also in fits of laughter watching poor Josie.

One person wrote on Twitter: “Josie Gibson makes my day when she’s on a ride, just hilarious.”

Are you looking forward to Ruth and Eamonn hosting over the summer? Leave us a comment on our Facebook page @EntertainmentDailyFix and let us know.