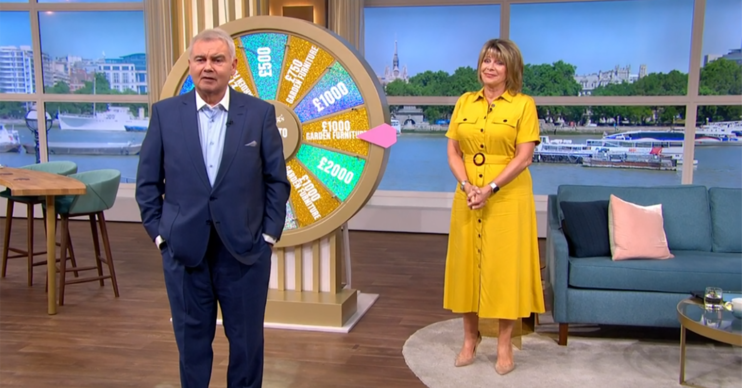 Eamonn Holmes and Ruth Langsford scrapped Spin To Win on today’s This Morning after viewers failed to answer.

The segment is often chaotic due to viewers saying the wrong pass phrase or not picking up the call.

However, on Friday’s show, Eamonn and Ruth had no choice but to postpone the game after nobody picked up.

Read more: Josie Gibson accuses This Morning bosses of ‘lying’ to her as she screams on theme park ride

Ruth, with her fingers crossed, added: “It’s the suspense we’re building, come on.”

A voicemail automated message then played and Ruth said they would try to call one more person.

She said: “Someone needs to be in.”

As the line failed to ring again, Eamonn said: “It’s quite obvious the system’s not working folks.”

Ruth asked: “Shall we come back to it? They’re dialing again, they don’t like to give up on this show.

“Let’s give it one more! This is the last one we’re trying.”

However, the line didn’t ring and Eamonn said: “There we go, case proven. All done?”

But miraculously, the line started ringing and a viewer picked up.

He said: “Hello?” which, of course, is against the rules because you have to say the pass phrase straight away.

They’re dialing again, they don’t like to give up on this show.

Eamonn asked: “Look, what’s your name, mate?” however the caller had already hung up.

Ruth said: “He realised his mistake and he’s gone. Have we got another one? No. It’s going to be a rollover on Monday.”

A relieved Eamonn said: “Oh thank goodness. They’re holding it to Monday. There we are, we don’t even have to do it today.

You can tell how much @EamonnHolmes loves playing Spin To Win! 😂😂😂 #ThisMorning

Read more: Phillip Schofield admits he was ‘kicking off’ ahead of today’s This Morning

“So no prizes, no garden furniture but the thought was there.”

Ruth added: “It will rollover, exciting.”

Viewers were amused with one writing: “You can tell how much @EamonnHolmes loves playing Spin To win!”

Another added: “I love how obvious Eamonn makes it that he DESPISES Spin To Win.”

A third said: “Why do people answer hello or don’t answer on #spintowin? Answer with the daily pass phrase and you can win something!”

Later in the programme, viewers were in hysterics when Josie Gibson was tricked onto a ride at Legoland.

Have you entered the Spin To Win competition? Leave us a comment on our Facebook page @EntertainmentDailyFix and let us know.