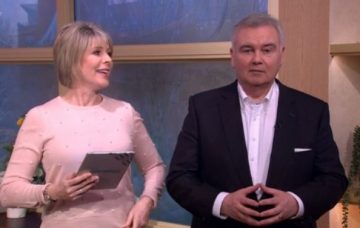 On Tuesday’s episode of This Morning – the first of the New Year – the presenter revealed how Ruth’s mother nearly took a tumble while out with Ruth on New Year’s Day.

Teasing a video of the incident at the start of the show, Eamonn said: “There should be a warning. If you’re off a nervous disposition, the horribleness that happens next…

“She lived to tell the tale but only just.

“I think the Crown Prosecution Service will probably get in touch and use that video as evidence.

“Ruth, trying to kill her mother, follows the local weather were you are.”

When the clip finally did air, it showed Mrs Langford – who has a broken hip – being pushed along the street in a wheelchair by Ruth.

The two women are laughing and smiling at the camera – until the wheelchair hits a pot hole and Mrs Langford very nearly falls out!

An embarrassed Ruth explained: “The wheel went into a pot hole and stopped dead. And there’s no seatbelt!”

But Ruth countered: “She laughed! I nearly face-planted her onto the tarmac and my heart was in my mouth.

Ruth took her Mother out for a breath of fresh air and tried to dump her- literally !

While the couple were laughing about the incident now, knowing that Mrs Langsford is okay, some viewers said it was an example of how some pavements can be dangerous for wheelchair users.