Standards were much higher back in Ken's day!

It’s not often local newspapers get the big juicy stories to report on – so it was a bumper week for Corrie’s Weatherfield Gazette with news of Luke attacking his racist abusers on New Year’s Day, and then the horrible revelation that Luke himself had been murdered.

But as the press pack descended on Coronation Street in Monday night’s episode, viewers had lots to say about the shonky portrayal of the media in the show.

First up for criticism was the front page of the Weatherfield Gazette, which was emblazoned with the story of the attack on New Year’s Day.

“Two brothers assaulted on New Years Day,” the headline read. And lots of viewers – most of them journalists themselves – were horrified.

“Cuts to journalism have hit Corrie’s Weatherfield Gazette harder than most,” wrote one disgruntled viewer. “No apostrophe in New Year’s Day,” he added.

And one devoted viewer even managed to read the small print making up the story and realised it was actually news of a development being approved by the council – not about the attack at all! 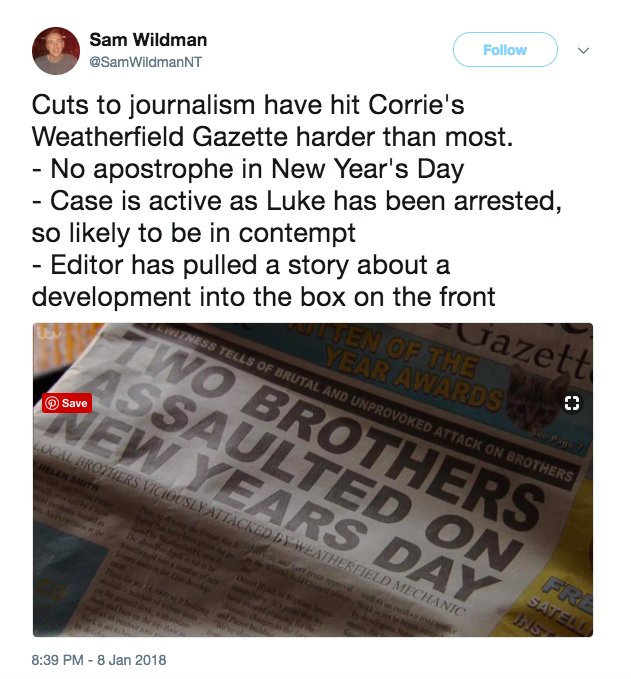 But it wasn’t just the Gazette that was getting it in the neck during Monday’s double episode.

As the media flocked to Coronation Street to get the latest on Luke’s brutal murder, viewers were horrified to see how the journalists were portrayed – desperate for pics of the bereaved friends, and chasing people down the street asking for comments.

One weary journo wrote on Twitter: “Amusing seeing what Corrie thought a Press Pack would look like. They should try halving the number at least, and then get a couple sat in a car eating a Ginsters and they’d be closer to the truth.”

Read more: Hugh Grant to become a father for a fifth time

“The Weatherfield Gazette has an impressive amount of photographers and journos for a local paper,” wrote another viewer, herself a local paper editor. And she added: “The whole ‘press conference’ outside the house was farcical.” 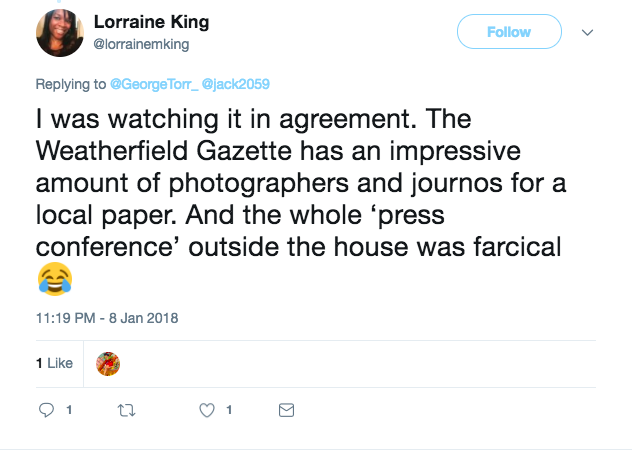 Other viewers joined in to express their dismay. “It would be nice if #CoronationStreet made a tiny effort to portray how journalists and media law actually works,” wrote one. While another pointed out: “Reporters and photographers running down the street getting in the faces of friends of a murder victim. THIS DOESN’T HAPPEN.” 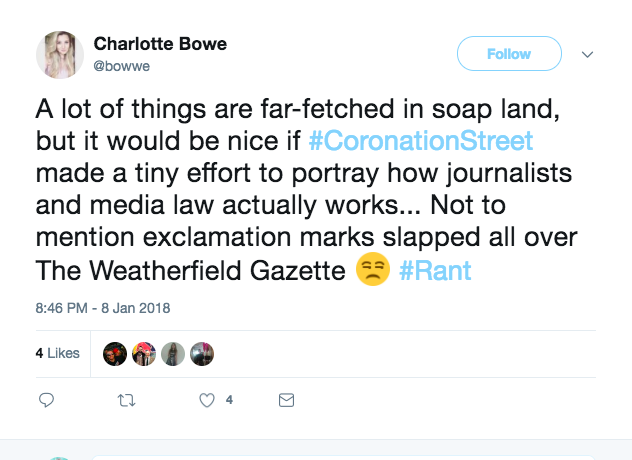 But those of us thinking that things must have been better back in the days when Ken Barlow was running the Weatherfield Gazette better think again.

“Standard of journalistic practice on the Weatherfield Gazette has been a joke for decades,” grumbled one fed-up fan.