We're not convinced - what do you think?

At least, we think he returned.

The exciting episode ended with someone watching Eileen from the backyard, then creeping over to take the spare key from under a plant pot.

And it definitely looked like her evil husband Pat Phelan to us!

But eagle-eyed viewers claim they spotted the murderous Street resident BEFORE the thrilling cliffhanger at the end of the episode.

In Wednesday’s episode we saw Phelan leave the B&B where he’s been holed up, because he had “things to do”.

Meanwhile, back on the Street, poor Eileen was nervy after the back door was found open, and nails were stuck in her car tyres.

When she heard noises in her house, she was terrified – but her intruder turned out to be Seb’s mum, Abi. 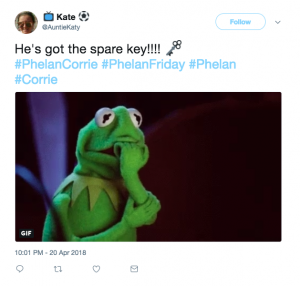 We all relaxed until the mysterious stranger, wearing boots and dark gloves, made his appearance in the back garden.

In one scene, earlier on, Eileen was arguing with Abi outside the house.

Before the row really kicked off, there was an odd moment as a car drove down the cobbles – past Alya – and the camera tracked its progress along the street.

Immediately, fans took to social media, convinced the driver was none other than Pat Phelan.

“Was that Phelan driving down the street then?” asked one viewer.

“Did anyone else spot Pat Phelan driving by as Eileen was talking?” said another. 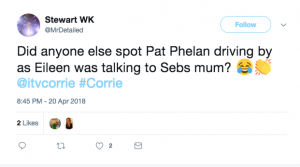 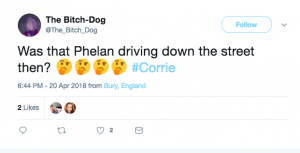 Another asked: “Did we just see Phelan driving down the cobbles and right past Eileen? I think we did.” 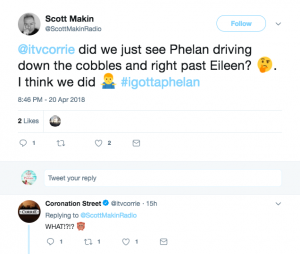 But we’re in the dark as to whether that means it was Phelan or it wasn’t!

What do you think? Let us know by commenting on our Facebook page @EntertainmentDailyFix!