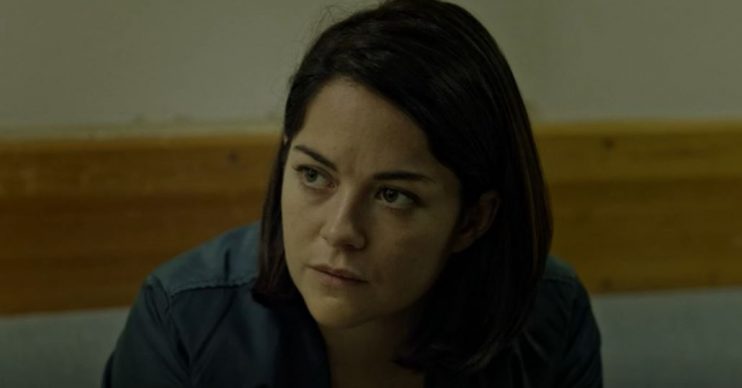 The second episode in this eight-part series, adapted by screenwriter Sarah Phelps from the novels by author Tana French, revealed new characters and showed existing players in a different, potentially disturbing light.

Here are our five burning questions after watching episode two.

When detective Cassie Maddox (Sarah Greene) confronted Frank Mackey (Tom Vaughan-Lawlor), the man who appeared to have been stalking her and breaking into her home, they talked about someone called ‘Lexie’. It appeared to be a name she used to go by, with Frank telling her he had got back in touch as a “friendly reminder not to reactivate your old identity”.

Cassie told him: “Frank, I haven’t been Lexie since this happened.”

Fast forward to the end of the episode, and the mysterious homeless man we’ve seen walking the roads outside Dublin was almost run over by an unknown driver.

Viewers got a brief look at the person behind the wheel – a woman with shoulder-length black hair, similar to Cassie’s. When she drove away, the camera showed the keys swaying in the ignition – and the name ‘Lexie’ on a keyring.

Could it be that Cassie is Lexie – or is Lexie her twin? When Cassie and her detective partner Rob Reilly (Killian Scott) were interviewing the Devlins’ elderly neighbour at the end of the episode, the woman called Katy’s disabled twin a ‘fetch’, a cursed sibling, and Cassie looked extremely uncomfortable.

Viewers previously saw Jonathan Devlin get up in the middle of the night to look in on his twin daughters. Katy was missing by that point, her bed neatly made by her older sister Rosalind. A further look showed that Katy’s twin, Jess, was also gone from her bed.

Jonathan then looked in Rosalind’s room. The teenager was lying in bed with Jess, who was asleep. But Rosalind was wide awake – and she looked startled at the sound of the bedroom door creaking open behind her.

Is the girls’ dad a paedophile? We saw in episode two that he harbours violent, potentially abusive tendencies when he stormed into the living room and roared at his family to turn the TV down.

Cassie pulled a gun on Frank when she caught him creeping around in her home.

They chatted like old acquaintances, but their conversation was far from friendly. Are they former colleagues, perhaps having working on cases together?

He told her he won’t be able to “protect” her if she “reactivates” the Lexie “identity”. What part does he play in Cassie’s as yet shadowy background?

4) What did the homeless man mean when he said ‘our evil’?

After episode two, we still don’t know what the homeless man meant when he said to a grown-up Cathal: “Our evil. You, me and Jonathan. There’s no escape. We can’t escape.”

We know they’re the teenagers from the 1985 scenes, now adults. But what “evil” is he referring to?

We also know the homeless man is the one painting the bizarre, potentially Satanic slogans on the billboards around the woods where the kids disappeared and Katy’s body was found.

What guilt is he harbouring?

5) Were the teenagers directly involved in the 1985 case?

Read more: Call the Midwife: When is series nine on and who is in it?

That brings us on to our fifth question. What was the teenagers’ involvement in the 1985 case, in which detective Rob – real name, Adam – was apparently the lone survivor?

He has no recollection of what happened that day in the woods, when his two pals vanished.

Witnesses at the time placed the four older teens at a cinema when the kids went missing. But we know they’re hiding something. One of them, Sandra Sculley, lied when she was questioned at Katy’s ballet school, insisting she doesn’t know Jonathan or his wife, Katy’s mum Margaret.

Did they have something to do with the disappearances?