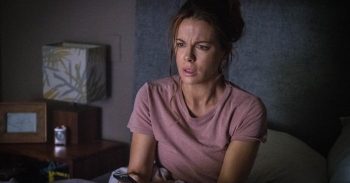 Some people didn't have a clue what was going on

The Widow has landed on ITV but this missing-person thriller appears to have viewers anything but thrilled.

The series, which is currently contending with the BBC’s The Victim, charts the misfortunes of Georgia Wells (played by Kate Beckinsale) whose husband Will (Matt Le Nevez) has been missing for several years after his plane went down in the Democratic Republic of Congo.

In the first episode, Georgia was living off the grid in Wales when, during a visit to her GP, she spotted a man who looked like her husband on the TV.

She then travelled out to Kinshasa in the Congo, where she met people who appeared to know more than they let on.

But as the plot went through its twists and turns, rather than keeping viewers hooked, it appeared to leave them more than a little confused.

One wrote on Twitter: “The Widow [is] very confusing and incredibly boring. 3/10.”

Another said: “How confusing is The Widow so far.”

A third tweeted: “Sticking with The Widow but it’s already confusing.”

How confusing is #TheWidow so far 🤔🤣

Others took the opportunity to slam the writing and lengthy ad breaks.

“They have dragged every actor that is still alive into this backwards and forwards tale that is so complex, it is totally confusing,” lamented one viewer, adding: “This is so expensive the advertising time is around 20 mins per episode. It makes #Rellik look simple.”

Someone else wrote: “The only thing worse than the terrible dialogue is the muddled, confusing, unbelievable effort of a plot.”

#TheWidow They have dragged every actor that is still alive into this backwards and forwards tale that is so complex, it is totally confusing. This is so expensive the advertising time is around 20 mins per episode. It makes #Rellik look simple.

The only thing worse than the terrible dialogue is the muddled, confusing, unbelievable effort of a plot#TheWidow

A number of potentially interesting sub-plots were thrown into the mix in the first installment of The Widow.

We met two blind people, Ariel and Beatrix (Ólafur Darri Ólafsson and Louise Brealey) who are both set to undergo an advanced procedure in Switzerland to restore their eyesight.

After a chat in the waiting room, they continue the conversation over drinks and we learn that while Beatrix lost her sight at a young age, Ariel was blinded in a plane accident in the Congo, tying him closely to the main plot. Does he know something about Will?

Viewers were also introduced to child soldiers Adidja and Molisho (Shalom Nyandiko and Likho Mango), who helped a group of militants take over a school. What part will they play in Georgia’s search for her husband?

And in the episode’s big cliffhanger, Georgia received a mysterious note telling her to ‘Go home’. Who was it from – friend, or foe?

If viewer reactions on Twitter were anything to go by, these questions alone weren’t enough to keep people hooked. Whether or not the answers will be either remains to be seen.

What did you think of The Widow’s opening episode? Leave us a comment on our Facebook page @EntertainmentDailyFix and let us know.