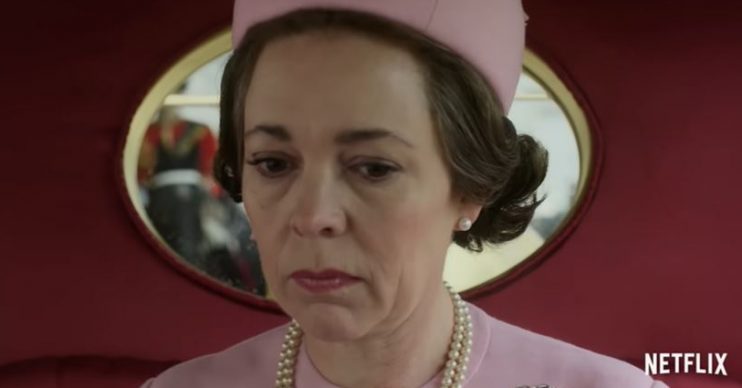 Season three is ruffling feathers ahead of its release…

The Queen’s former press secretary has slammed TV show The Crown for suggesting she had an affair with her horse racing manager Lord Porchester.

Series three – which enjoyed its premiere last night in London – drops on Netflix this weekend.

Ahead of its release, Dickie Arbiter told The Sunday Times: “The Queen is the last person in the world to have ever considered looking at another man.”

He added: “Not only is this muckraking – this is gossip that’s been washing around for decades. It’s got absolutely no substance.”

Episode five of the new series of The Crown will see the monarch – played by Olivia Colman – travel to stud farms in America and France with “Porchie”.

Upon her return, she is seen being questioned by husband Prince Philip.

Not only is this muckraking – this is gossip that’s been washing around for decades. It’s got absolutely no substance.

While Her Majesty was friends with Lord Porchester until his death in 2001, there is no evidence to suggest they shared anything more than friendship.

Dickie accused The Crown’s writer Peter Morgan of “beefing up” his scripts and said he was worried people will take whatever he writes as “sacrosanct”.

Read more: Lisa Armstrong “worried Ant will propose” to Anne-Marie once their divorce is finalised

“The Crown is fiction – people will tell the story they want to and sensationalise it,” he said.

Fans of the monarch aren’t best pleased about the show’s scandalous storyline.

One said: “Yeah – this was really not cool of @netflix.”

Is there any evidence that she had an affair?

Did I just hear that the new series of #TheCrown suggests the Queen has an affair? FFS!!! Unbelievable 😢😢😢😢

What do you think of the storyline? Tell us on our Facebook page @EntertainmentDailyFix.