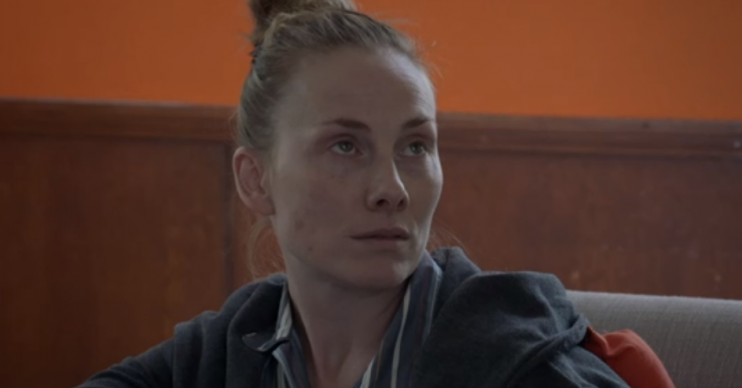 Jac has been struggling with her mental health

Viewers of Holby City have found the recent Jac Naylor scenes hard to watch as her mental health storyline continues.

Over the last few weeks, fans have seen Jac struggling with her mental health.

In last night’s episode of the BBC medical drama (December 10 2019), Jac was admitted to a psychiatric unit in Merrywell following her breakdown during last week’s episode (December 3 2019).

After she woke up, Jac began wandering the corridors where she ran into a patient who asked her when she last saw her daughter.

A couple of moments later the woman disappeared. Was Jac’s mind playing tricks on her?

She then received visits from the ‘three wise men’ in her life.

Firstly, friend Fletch arrived with a myrrh fondant chocolate, but the reception he got was frosty.

Fletch tried to convince Jac that the treatment would benefit her and her daughter, Emma.

But Fletch’s visit didn’t go well as Jac branded him a failure and blamed him for her being sectioned before storming out.

Next to come and see Jac was Sacha, who brought her frankincense scented toiletries, but this visit wasn’t much better received.

He thanked Jac for being there for him when he was depressed, but that caused Jac to lash out.

She denied being weak and having mental health problems before attacking him so violently that a staff member had to intervene.

Although Jac kept refusing to take the pills, she eventually gave in and agreed to start treatment.

The third and final person to visit her was Elliot Hope, who survived his surgery in last week’s episode.

He gave Jac sellotape and used it to fix a picture Emma had drawn.

He explained the concept of Kintsugi, a Japanese art of mending broken pottery and gave Jac a gold heart-shaped necklace.

Watching Jac struggle with her mental health is so difficult to watch so imagine going through that everyday, always be kind as you never know what people are going through 😩😩 #HolbyCity

Aww , Fletch came to see Jac. I really want her to get well. It’s so hard seeing her like this. #HolbyCity

You know #holbycity is getting Jac's storyline so right, when you see parallels with your own battle. Hard watching

Finding it a really hard watch tonight! Hate seeing my fave character in so much trouble/pain. Poor Jac! 😢 #holbycity

My god, Jac's breakdown was difficult to watch. Took me straight back to my own bad times. #HolbyCity

They also heaped praise on Jac actress Rosie Marcel for her performance.

Rosie has recently opened up about her own mental health struggles, breaking down in tears on This Morning during an interview with Phillip Schofield and Holly Willoughby.

Just finished watching this weeks' @BBCHolbyCity and I was just blown away, Rosie is just amazing and so is @misslenn I can't wait to see what happens next! 🎉💙 #HolbyCity

All the awards for Rosie Marcel, she's absolutely brilliant.#HolbyCity

Rosie Marcel is such a talent #HolbyCity

After her final visit, Jac finally started considering the advice of the three wise friends.

Will Jac find it in her to fight her demons?