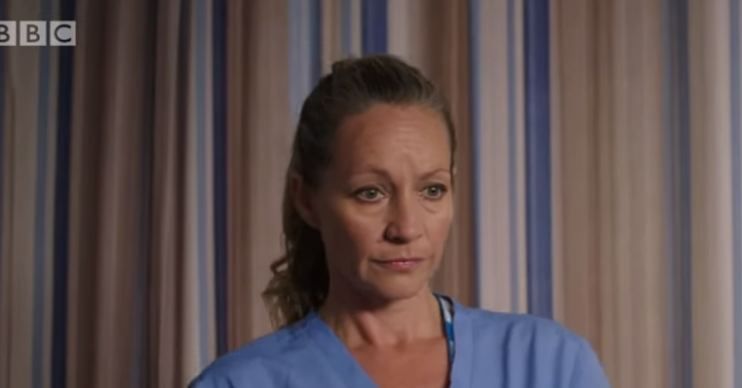 Essie gets a shock visitor tonight

In tonight’s episode of Holby City, Essie has a visitor when Isla’s father Connor turns up looking for Frankie, the baby’s mum.

There’s a party to celebrate Essie’s ‘adoption’ of baby Isla.

The only person who knows that Isla isn’t legally Essie’s is Sacha.

However, Sacha is determined to support his ex.

Essie is soon in for a shock when Connor, Isla’s father, turns up at the hospital looking for Frankie.

But Connor is soon suspicious when Essie begins acting defensive.

Later Sacha is excited because he has a groundbreaking procedure to perform, but theatre nurse Essie seems distracted.

Viewers know that Essie recently agreed to look after the baby daughter of a struggling relative of her late husband Raf.

Although the arrangement is not legal, she has allowed her colleagues to believe that Isla came to be placed in her care as a result of the adoption process.

Read More: Line Of Duty creator reveals drama ‘could be back with series six in 2020’

Kaye Wragg, who plays Essie, recently spoke to Digital Spy at the Inside Soap Awards and teased that there is “something really beautiful” happening soon.

She said: “Obviously Essie became a mum in a very unconventional manner.

“Technically, she has a child that isn’t hers, and by law shouldn’t still have. There are going to be future complications and along with that future happiness.

“Future happiness is definitely on the cards, but inevitably, there will be some sadness. The audience will enjoy one of the stories coming up. In three months’ time, there is something really beautiful happening.”

Holby City is on at 8pm on BBC One