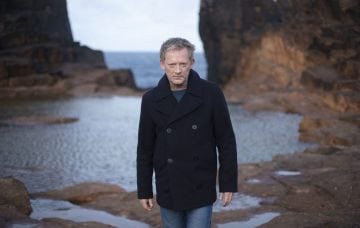 Shetland fans said goodbye to DI Jimmy Perez last night, as the fifth series of the crime drama came to an emotional and dramatic end.

On Tuesday (19 March), Jimmy found missing girl Zizi in the nick of time, reunited her with her mum and exposed Chris Brooks as a wrong’un all within the space of a tense hour.

Viewers immediately took to social media to beg the BBC for a sixth series, but actor Douglas Henshall worried fans when he cast doubt on it.

One fan wrote: “Loved series six and very much want another series of #Shetland @BBCOne.”

Another added: “I have been totally absorbed by #Shetland over the last six weeks, can’t wait for news of series six.”

A third added: “So #Shetland. Brilliant series, but who tipped off the guy in the van in the penultimate episode? Will Sandy be back? And…Will there be a series six? What say you @djhenshall?”

“Fingers crossed there’s a series six,” said another. “And that we can #SaveWirSandy.”

One said the series was the “best so far, so please please please let there be a series six”, and another said they were “having withdrawal symptoms already”.

To everyone asking about another series of #Shetland Its the BBC who commission it and they still haven’t made a decision whether or not they want more. That’s where it’s at.

However, Douglas couldn’t give fans what they wanted – confirmation of another series.

Instead he wrote: “To everyone asking about another series of #Shetland. It’s the BBC who commission it and they still haven’t made a decision whether or not they want more. That’s where it’s at.”

He also thanked fans for their support, tweeting his 44,100 followers: “Thank you for all the wonderful comments and support over the last six weeks, it’s been overwhelming and makes me feel incredibly grateful. You’re the best.”

If season six does get the go-ahead, the new series would likely start sometime around February 2020.

The drama is based on the crime novels by Ann Cleeves, of which there are nine books in the Shetland Island series – so there is plenty of source material to draw from!

Despite the story largely taking place on the Shetland Islands, most of the filming is done on the Scottish mainland.

For the fifth series, the cast was spotted filming in Lerwick, the capital of the Shetland Islands and the only town in the entire Isles.

The Shetland Isles are made up of more than a hundred islands, 15 of which are uninhabited, and it has a population of just 22,000.

Do you care if Shetland returns? Leave us a comment on our Facebook page @EntertainmentDailyFix and let us know what you think!