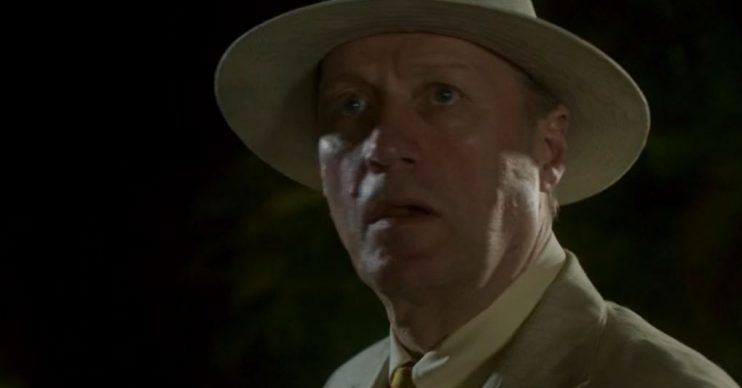 How would that work?

Fans of crime drama Death in Paradise rushed to social media after spotting a blunder in the opening episode of series nine.

The popular programme, starring Ardal O’Hanlon as DI Jack Mooney, returned to screens on Thursday (09.01.20) night to take viewers back to the fictional Caribbean island of Saint Marie.

It saw The Young Ones actor Ade Edmondson make his debut in the show as Charles Crabtree, who was both a witness and suspect in a grizzly murder case.

But during one bloody scene, viewers spotted a mistake as the character appeared to use his mobile phone upside down.

Earlier in the episode, a masked man knifed a woman to death and Charles later saw Donald McCormack (played by The Crown star Samuel West) seemingly attacked by a masked marauder.

As Donald lay bleeding on the floor, Charles called emergency services. But viewers noticed that the charging port and headphone socket on the device were clearly visible, meaning he was holding it the wrong way up.

Rushing to Twitter to point out the gaffe, one viewer wrote: “I’m glad I wasn’t the only one who noticed that Charles Crabtree was holding his phone upside down when he called emergency services #DeathInParadise.”

Another asked: “Is that phone upside down?”

Lovely use of an upside down mobile phone.

A third put: “He was definitely holding that phone upside down, right? #DeathInParadise.”

Someone else joked: #DeathInParadise lovely use of an upside down mobile phone.”

“He had the phone upside down. Rookie error. #DeathInParadise,” said a fifth.

A sixth, seemingly exasperated with all the tweets, said: “Yes, the phone was upside down and no, the actress wasn’t actually stabbed to death. It’s called make belief #DeathInParadise.”

He was definitely holding that phone upside down, right? #DeathInParadise

#DeathInParadise lovely use of an upside down mobile phone

He had the phone upside down. Rookie error.#DeathInParadise

Yes, the phone was upside down and no, the actress wasn’t actually stabbed to death. It’s called make belief. #DeathInParadise

This series will be Ardal O’Hanlon’s last as DI Mooney, as the BBC revealed the former Father Ted star would be stepping down from the lead role.

The Irish actor said at the time: “It’s been a hugely rewarding and unforgettable experience, working with incredibly talented actors, directors and crew while discovering a magical part of the world. However, it’s time to move on and explore other opportunities – preferably nearer the Arctic Circle.”

Ardal is due to be replaced by The Royle Family actor Ralf Little, who will play a new lead in the show.

Are you enjoying Death in Paradise so far? Leave us a comment on our Facebook page @EntertainmentDailyFix and let us know.