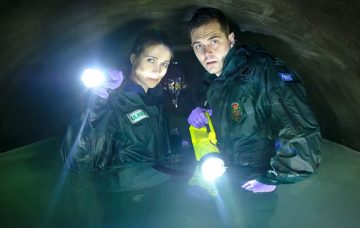 Will our heroes come out alive?

The stakes are high when Casualty favourites Iain and Sam face a particularly dangerous call-out in this week’s episode (Saturday 19 May).

In some of the series’ most dramatic scenes ever, viewers will see the paramedics caught up in a storm drain drama.

We’ll see the pair neck-deep in water and running out of time – and air – as they attempt to save a trapped and injured teenager boy.

Read more: Why did Casualty beat Corrie and Emmerdale to the BAFTA this year?

The frightening ordeal shows Iain and Sam fighting to get the teen and themselves out alive – which ends with the pair being forced to make a life-changing decision.

Arriving on the scene, the pair head into the drain only for the situation to intensify rapidly.

With the water rising to waist height, the paramedics are forced to make an impossible decision, but what is it? And will everyone get out alive?

Meanwhile, Bea’s secrets are revealed and she finally has to confront her demons.

Coming up on #Casualty! 🚑
Iain and Sam, neck-deep in water and running out of time, are forced to make a life-changing decision. 😨 Tune in 8.30pm on @BBCOne! pic.twitter.com/ng3XbJaN8Y

It’s set to be a nailbiting episode of the drama, which has been thrust into the limelight, deservedly, after scooping a BAFTA award for Soap and Continuing Drama.

The long-running show, which has been on air for 32 years, beat Coronation Street, Emmerdale and Hollyoaks to the coveted prize.