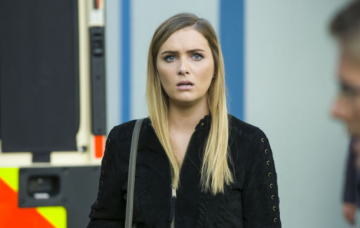 She will struggle to come to terms with the assault

Casualty favourite Alicia Munroe will be subjected to devastating rape in an episode set to air later this month.

Viewers will see Alicia waking up after a boozy night out with work mates and she’ll realise, through flashbacks, that she didn’t consent to having sex with Eddie.

Over a period of six weeks, we’ll see her struggle to come to terms with what’s happened… and how to move forward.

Of the plot, Alicia says: “I’ve felt a distinct sense of responsibility for this storyline from the moment Lucy Raffety, our Series Producer, informed me we were going to explore it here at Casualty.

“I think now, more than ever, it is so important that we use our platform to highlight such an issue.

“Through the sensitive writing, dedicated and passionate directing, and utmost love and support from each and every cast, crew and production member, I believe that we have dealt with the storyline authentically and respectively, and I hope it helps anyone that is, or has been through anything of this nature.”

Read more: Shona is closing in on rapist Josh in Corrie

Katie Russell, spokesperson for Rape Crisis England & Wales, who have advised on the storyline, adds: “Sexual violence can be a difficult topic to handle sensitively on television, not least of all because of the number of common myths and stereotypes that it’s vital programme makers are aware of and avoid perpetuating.

“It’s important to remember too of course that sexual violence is much more widespread than many people realise so there will inevitably be victims and survivors of rape, child sexual abuse and sexual assault in the audience for any show, for whom this kind of content could be particularly distressing or even triggering.

“This is why its crucial programmes make viewers aware of upcoming storylines like this, as Casualty is doing, so victims and survivors can choose whether or not to watch.

“At the same time, continuing dramas like Casualty aim to reflect important issues in society and people’s lives and, sadly, sexual violence is a reality for many, so to shy away from it completely would seem conspicuous and even potentially run the risk of reinforcing the idea that it’s a ‘taboo’ topic.

If you want to speak to anyone confidentially about rape or sexual assault, contact Rape Crisis England & Wales.

Do you think soaps and dramas cover rape stories sympathetically and realistically? Let us know your thoughts on our Facebook page @EntertainmentDailyFix.