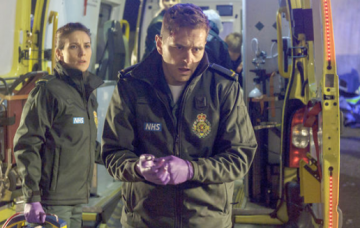 What punishment lies ahead?

Hospital drama Casualty has killed off one of its characters in a dramatic episode involving a 13-car pile-up and explosion.

The first episode of the 33rd series of the BBC One medical drama saw paramedic Sam Nicholls (played by Charlotte Salt) fatally injured after a piece of shrapnel flew into her side during the explosion caused by a fuel tanker involved in the car accident.

Sam’s injury wasn’t discovered until telling fellow paramedic Iain Dean (played by Michael Stevenson) it was “too late” and she died in the back of an ambulance as he called for assistance.

Charlotte returned to the medical drama last year after a four-year absence from the series.

Her character, Sam, had previously been a doctor but returned as a paramedic.

Viewers watched as Iain crashed the ambulance he was driving, causing the massive motorway pile up.

He had swerved to avoid hitting a young woman jumping off a bridge.

The woman, Mia, was a patient he had visited, and someone who had previously struggled with mental health issues, but Iain brushed off her latest episode to leave and help one of the hospitals doctor’s Alicia Monroe (played by Chelsea Halfpenny) who had been injured.

Actor George Rainsford, who plays Dr Ethan Hardy, tweeted ahead of the episode to jokingly ask fans to let him know if his character died.

Off out tonight to see the lovely @Michelle_Foxx in her play #Translations @NationalTheatre. Can someone let me know if I die in #Casualty please? Ta…

He tweeted again a couple of hours later to say that he didn’t know how the episode would play out, and joked about multiple endings being filmed.

All jokes aside we actually filmed 72 different endings for tonight’s #Casualty season opener, including a musical one, so none of us know what’s going to happen. #prayforDervla

Viewers were, naturally, upset about a favourite character being killed off…

Of all the people to kill off, why Sam? @charlottesalt😰 I’m sobbing😭 #Casualty

I’m full on sobbing, heartbroken, MASSIVELY angry, in denial, my nights ruined, my years ruined. I hate everything & I will NEVER get over Sam’s death. My heart has been ripped out & destroyed tonight. Fml. 💔💔💔 #Casualty3006 #Casualty pic.twitter.com/sXHCzHzJGs

What are you doing to us pic.twitter.com/Njy2b4u6tr

But many are more concerned what this will mean for Iain…

Sam dies. Mia dies. I feel like they’re sign posting a break down for Ian. Could he be leaving too? #casualty

Why is it always the paramedics? Polly? Jeff? Now Sam? Can someone wrap Ian up in bubble wrap please😟 #Casualty

What did you think of the season opener? Let us know what you think by leaving us a comment on our Facebook page @EntertainmentDailyFix!