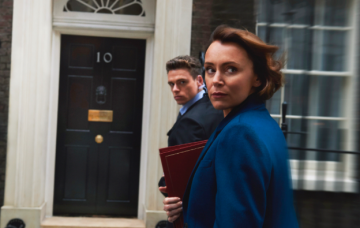 As much as the rise of social media has become a thorn in the side of celebrities, who are subjected to terrible trolling on occasion, it’s also given them a platform to set the record straight swiftly and immediately.

These days when a newspaper or magazine writes something untrue or misleading about them, public figures can use Twitter and Instagram to set the record straight.

And actress Keeley Hawes is the latest famous face to do just that.

Read more: Sex in Wanderlust a turn-off for viewers

One of our most talented and prolific stars, she doesn’t court publicity, yet interest in her leads to column inches being written about her personal life, not just her career.

She’s hilariously quashed one such article which claimed to reveal how she had lost a significant amount of weight for her role in Bodyguard.

Seizing on a tweet of said piece, Keeley witheringly and succinctly wrote: “Um, no I didn’t.” 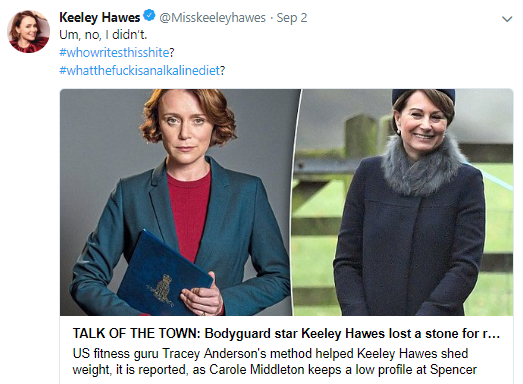 Meanwhile, terror thriller Bodyguard has become the biggest new drama on British television in more than a decade, the BBC has said.

The BBC One series – which also stars Richard Madden as the officer assigned to protect her Keeley’s– has achieved consolidated viewing figures of 10.4 million for its first episode.

This is the highest launch figure for any new drama across all UK channels since 2006, the corporation said.

The series, written and created by Line Of Duty’s Jed Mercurio, kicked off on August 26, when it scored the highest overnight audience for a drama launch this year by more than one million viewers.

It drew an average overnight rating of 6.7 million and an audience share of 35%, the BBC said, and peaked with 6.9 million viewers.

On BBC iPlayer, the show has broken drama debut records – with episode one getting 2.2 million requests in its first seven days – and so far over all.

Jed said: “The success of Bodyguard is a tribute to the magnetism of our two leads, Richard Madden and Keeley Hawes.

“I’m exceedingly grateful to World Productions and to the BBC who have supported the project throughout production, and to the viewers who’ve responded with such enthusiasm.”

Charlotte Moore, director of BBC content, added: “I’m thrilled with the response to BBC One’s new Sunday night drama Bodyguard, the figures are extraordinary and all credit to the mastermind creator and writer Jed Mercurio who is surprising the audience at every turn.”

Both Keeley and Richard have thanked viewers for their support.

Amazing news! Thrilled to bits. Thank you so much to everyone who’s been watching!💥 https://t.co/RDbbjTXej3

Wow! Thank you to everyone who’s tuning in! 🙌🏻 https://t.co/YXYV2qknSV

Bodyguard continues on BBC One this Sunday at 9pm. Do you think Julia has survived the blast at the end of episode three? Leave us a comment on our Facebook page @EntertainmentDailyFix and let us know what you think!