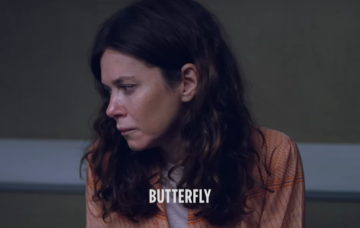 Friel, 42, and former Hollyoaks actor Emmett J. Scanlan play parents reacting to the wishes of their young son to live his life as a girl and making difficult decisions about what is best for him.

And although the miniseries has been described as a “heartwarming” tale that “focuses upon gender identity and one boy’s search to be recognised for who he really is” by ITV’s Head of Drama, producer Nicola Shindler is prepared for strong reactions from audiences.

Insisting the contentious issues surrounding gender identity should not put viewers off from watching, she added: “It’s an incredibly difficult subject matter because people are so anti or so pro.”

Shindler continued: “A lot of people haven’t decided how they feel about whether a child should be able to take medication or go through an operation, and whether we should listen to children that age.”

No doubt viewers will be quick to make their mind up about an 11-year-old character coming to a conclusion about such a life-changing decision. And they will possibly do so even before watching.

But before airing later this year, here’s a little bit more background information about Butterfly and star (and co-producer) Anna Friel to pique your interest.

What happens in Butterfly?

Scripted by BAFTA winner Tony Marchant and filmed in Manchester, Butterfly follows Max as decides he’s in the wrong body.

Not yet a teenager, Max has always dressed like a girl at home but no longer wishes to hide who he is.

Parents Vicky and Stephen are separated which puts additional pressure on their son who longs for a perfect family.

And although Max’s momentous wishes see his dad move back in with the family to provide more support, his parents remain divided on what they think is best – even though their child’s happiness is paramount.

So as Max’s conviction that he’s in the wrong body intensifies, so does his father’s reluctance to allow his son to become his daughter.

“The writing is so real, so relevant, so topical and so brave, which are the reasons why you get involved in projects like this.”

Acting since the age of 13 – her first role was in GBH as the daughter of Michael Palin – Anna’s performances have always commanded attention.

As well as being a draw for telly audiences, she also shied clear of being involved with too many stinkers and has attracted critical acclaim.

Accordingly, that success has translated into awards and she has an Emmy and a Golden Globe nomination to her name.

Here’s a reminder of some of her most memorable roles.

Anna Friel’s breakthrough role came as Beth Jordache in Brookside between 1993 and 1995.

Her stint was highlighted by being involved in the first portrayal of a lesbian kiss in a British soap opera.

Anna’s stardom rocketed as she became a tabloid favourite and she bagged a NTA for Most Popular Actress in 1995.

An eye-opening role including full-frontal nudity followed in 1996 as Anna appeared in Stephen Poliakoff’s The Tribe.

However, being cast in Our Mutual Friend in 1998 marked a bigger step in Anna’s career.

Not only was she playing the lead in a BBC adaptation of a Charles Dickens novel, she shared the screen with a raft of household names.

She played the formerly dead childhood crush of a pie-maker whose touch could bring dead things back to life, filming two series between 2007 and 2009.

Together, they solved murders…. because of of course they do.

The Look of Love

She said: “It’s a curious experience, watching yourself on-screen as an old, or at least older, woman.

“But it’s not necessarily a bad one.”

“Besides, I suppose I’m going to have to get used to it,” Anna added.

Anna won an International Emmy for her performance as blackout-suffering sleuth Marcella in the first series of the ITV drama.

Preparations have been made for a – currently unconfirmed – third season of the Entertainment Daily favourite, according to writer Hans Rosenfeldt.

Who else is in the cast of Butterfly?

The Dublin-born actor has also appeared in The Fall and BBC Three’s In The Flesh.

Acting legend Alison Steadman made her name in the 1970s with iconic performances in Mike Leigh productions such as Abigail’s Party.

She has gone on to huge success on stage and in TV and film with parts in The Singing Detective, Pride and Prejudice and Gavin and Stacey.

Will you be watching Butterfly? Are you an Anna Friel fan? Leave us a comment on our Facebook page @EntertainmentDailyFix and let us know!