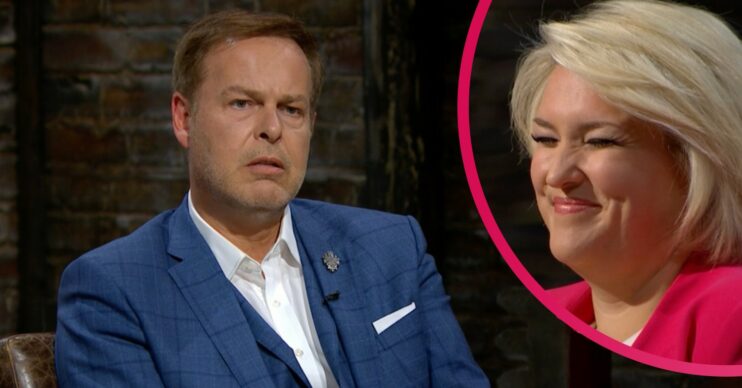 Best not watch this bit of the show if you're eating...

Dragons’ Den has had some pretty weird business ideas pitched on it over the years, and last night’s episode (Thursday, February 10) saw yet another one added to the ever-growing pantheon – Wype gel.

As always, it didn’t take long for viewers to start making fun of it. Plenty of memes were posted about it on Twitter, and we’re going to show you some of our favourites!

During last night’s show, Giorgia and her husband, Eli, pitched their “poo product”, Wype, to the Dragons.

Wype is a gel that can turn normal toilet paper into environmentally-friendly wet wipes.

The Dragons, and viewers, seemed interested at first, but when Giorgia and Eli went into more detail about the origin of their product, interest turned into disgust.

Explaining why they were making the gel, Eli said: “Dry doesn’t clean.”

“You wouldn’t clean your dishes with a dry washcloth and certainly, if you had poo on your arm, you wouldn’t be satisfied just wiping it with dry tissue,” he continued.

Peter Jones was confused, however. “So, you guys said this gel helps you when you have poo on your arm. I’m a bit confused if I have been doing it wrong all these years,” he said.

“In some nationalities, it’s acceptable to leave residue on their private parts,” Giorgia explained, much to the horror of viewers.

Viewers were horrified at learning Giorgia’s disgusting fact, and it didn’t take them long to start poking fun at it on Twitter.

Here are some of our favourite memes and tweets about Giorgia and Eli’s poo product on Dragons’ Den last night!

Who had ‘Peter thinks a product is for wiping poo off your arm’ on their Dragons’ Den bingo? Certainly not us! #DragonsDen pic.twitter.com/OWIPrdMPhA

The best tweets about ‘Wype’

Plenty of viewers were feeling a little nauseous after watching that segment of the show last night.

“Feel literally nauseous after watching #DragonsDen. WTF!!! I was eating my dinner,” one viewer complained.

“Poo on your arm….this escalated quickly,” another surprised viewer said.

“I can smell it from here. Hoping nobody backs this [bleep],” a third wrote.

Read more: Dragons’ Den behind the scenes: where is it filmed and is it all real or is some of it scripted?

“Gagging after that clip on Dragons’ Den!!! As if people literally leave poo on themselves. No way would I invest in that,” another said.

“Who on earth leaves [bleep] residue on themselves after wiping their bums? That’s SICK,” a fifth said.

One viewer couldn’t help but laugh though.

“Hahahaha the way Steven Bartlett said it was a ‘cracking’ product. Man knows how to throw in a pun,” they tweeted.

Dragons’ Den continues on Thursday, February 17 at 8pm on BBC One and BBC iPlayer.

Have you seen any funny memes about last night’s Dragons’ Den? Leave us a comment on our Facebook page @EntertainmentDailyFix and let us know!