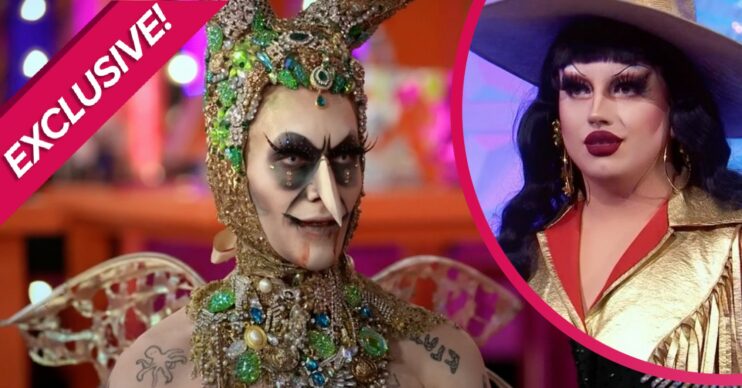 There were several scenes that never made it to air.

Charity Kase has opened up about her Drag Race UK elimination – revealing a close friendship that was cut from the show.

The 26-year-old queen was sent home in week five following the less-than-impressive Draglexa challenge where all contestants landed in the bottom.

Speaking exclusively to Entertainment Daily! Charity admits that she was ready to leave the competition.

She also says that one of her closest friendships never made it to screen, with Choriza May providing much-needed support when she was feeling low.

“There was a really lovely moment between me and Choriza, where she left me a note on my table in my space, which basically just told me to get out of my head, to believe in myself, that I was amazing,” she told us.

“She gifted me two magpie skulls, which she’d completely crystallised. She told me that they would look better on me than they ever would on her, and that she wished me all the luck.

“That was just such a heartwarming moment. I love Choriza. She’s amazing. Her humour is just next level – she’s brilliant.”

During her time on Drag Race, Charity was widely praised as she spoke about her HIV diagnosis openly.

Educating viewers on the incredible progression of medicine around the virus, and explaining how she’s now undetectable, therefore untransmittable, Charity explained to Kitty Scott-Claus it was the stigma, rather than the actual disease, that leaves her feeling isolated.

Charity admits that she wasn’t expecting such a response from her discussion. In fact, she never intended to share as much as she did.

“I went into the show with the intention of telling my story to a certain extent. But whilst I was in there, I chose to go a bit – be more honest and like, just lay it all out,” she explained.

“I think that was kind of like a coping mechanism for feeling like I wasn’t really achieving what I wanted to achieve on the show so I felt like I could achieve something else instead.

“It felt like the one thing that I had power over was my story. So I used that power, and the support has been absolutely incredible. The messages that I’ve got are next level.

“Honestly, it’s amazing to feel like something that I said has changed so many people’s lives.”

So far, the following queens have had to sashay away…

In week four, Charity Kase and Scarlett Harlett managed to convince RuPaul to save them both.

However, after injuring herself in the first week‘s winner’s lip-sync, Victoria Scone had to withdraw in week two.