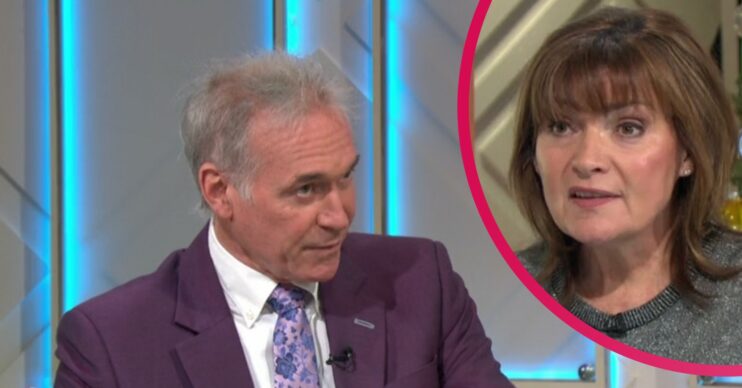 Appointments for other medical problems will fall by the wayside

Dr Hilary Jones has been slammed by viewers after his comments about the COVID booster jabs on Lorraine today (December 14).

Fans of the show took to Twitter to criticise the doctor after he insinuated he was happy for people to wait up to five hours to have their booster jab.

What did Dr Hilary Jones say about the booster jabs?

The government recently announced plans to give one million booster jabs per day amid fears over the Omicron variant.

Richard was stood outside St Thomas Hospital in London. Behind Richard was a large queue of people waiting to get their booster jabs.

Lorraine then spoke to Dr Hilary about the jab rollout.

“A million jabs a day sounds incredible,” Lorraine said. “But it’s a big ask, isn’t it?”

Lorraine said it was “brilliant to see those queues” but again reiterated that a million jabs a day is a “huge ask”.

“It’s really, really ambitious,” Dr. Hilary Jones confirmed. “And isn’t it great that we’ve got that demand? People understand the need for boosters.”

Dr Hilary Jones did confirm, however, that the country only managed to give out half a million jabs yesterday, but Lorraine said that that number was still good.

What else did Dr Hilary say?

The doctor then said that GPs only heard about the mass rollout of booster jabs at the same time as everyone else did.

He then said that people will need to “manage their expectations” because not everyone will have had their booster by the end of December.

“Look, they’ve [people] got to be patient, this is a massive operation, we haven’t seen anything like this before,” he said.

He then went on to say that there had been people waiting in queues for five hours yesterday for their booster jabs.

“It just goes to show that people understand the messages, how important it is to get the booster, and it really is, because Omicron is more transmissible,” he said.

He then said that people could go to a “walk-in” to get their booster, but will have to be patient. He then suggested that if people did that, they should take a book and wrap up warm.

“It’s not ideal,” he admitted, “but we’re in a situation which is a crisis.”

Hilary said he did “feel” for people currently in pain and those awaiting appointments for cancer treatment and diagnosis, but he assured viewers that GP will be there to help.

“They just can’t be in two places at once,” he said. “Something has to give.”

What did viewers of the show say?

Some fans of the show were not happy with Dr Hilary’s comments and headed to Twitter to let their feelings be known.

“Dr Hilarious has genuinely just said on live TV when discussing cancer patients that ‘something has to give…’ suggesting he believes vaccinating the population against a less serious strain is more important than those who may/do have cancer receiving treatment,” another said.

“Did Hilary just say it was acceptable to queue for 5 hours and to take a book? If so he really is something else. 5 hrs in winter in the damp not a problem. Seems ridiculous to me,” a third viewer tweeted.

“I get so angry watching these 2. I don’t know why I do it to myself,” another angry viewer said.

What do you think about Dr Hilary Jones’ comments on Lorraine today? Leave us a comment on our Facebook page @EntertainmentDailyFix and let us know.