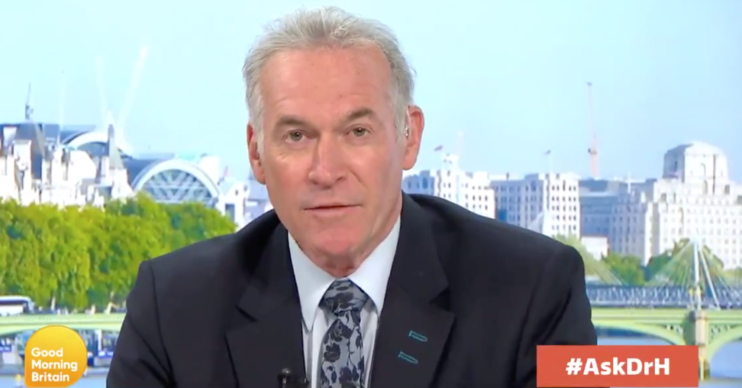 On Good Morning Britain today (May 13), Piers Morgan pointed out that many weren’t happy around new coronavirus guidelines.

He explained that people believed that the economy was being prioritised over people’s wellbeing and families.

“We keep being told common sense is the driving force behind all of this but a lot of it is nonsensical,” he said.

“Here’s an example – estate agents have been told you’re back in business.

“I can book 50 different appointments today to visit 50 random families.

“Oddly, I can spend all day dong it as long as I maintain social distancing in the houses.

“Yet what I can’t do is go to my parents’ house because that’s against the law – I would be fined.”

Piers then accused the government of prioritising returning to work over families being reunited and question if it was safe.

Although GMB’s Dr Hilary Jones acknowledged that he could understand Piers’ argument, he disagreed and explained his reasoning.

“The government’s scientific advisors would say this – when we’re in contact with our families and those dearest to us, we tend to be more intimate,” he said.

“We tend to want to hug them, get closer to them and spend much longer with them than we would someone looking at our house.

“The government is saying that if you’re with an extended member of your family, you are much more likely to transmit the virus.

“And that is why they are very sensitive about having gatherings of more than one other person.”

'The government would rather you go to work with people than see your own people, but is it safe?' – @piersmorgan

On a day thousands return to work, @DrHilaryJones explains why the government has encouraged people to return to work but has still banned family visits. pic.twitter.com/GTEJkpQo5M

“They’ve got a point,” she admitted. “I am going to sit here more than two metres away from [Piers] and there is absolutely no way that I am going to hug you.”

However, those tuning in at home were divided by Dr Hilary’s comments.

Some tweeted their support: “It’s a crying shame that Dr Hilary isn’t part of the daily Government briefings.

“The clarity and composure he exudes when explaining every point he’s been asked during pandemic has been exemplary and extremely reassuring.”

But some were more skeptical: “Here we go again Dr Hilary straight away supporting the government he must be getting paid by Boris.

“For once tell the public the truth.

“There is double standards in these government guidelines will Dr Hilary admit it for once.”