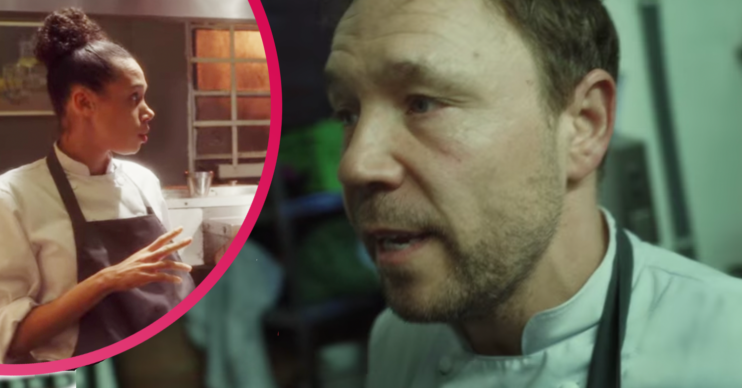 The one-take film is getting rave reviews

Stephen Graham has officially reached Boiling Point is his new feature film which has just landed on Netflix – but does his character Andy die at the end?

It’s an ambiguous close to a rollercoaster ride of emotions.

The movie, which aired in cinemas earlier this year, is already blowing viewers away on the streaming platform.

Read more: Who is Line of Duty actor Stephen Graham and where is he from?

Here’s our review of the film, which was based on a 2019 short also starring Stephen Graham, and a round-up of what others are saying.

There are SPOILERS ahead. This is your warning.

What is Boiling Point about?

Chef Andy’s night gets off to a pretty bad start when, following a row with his estranged wife about their son’s school play, he learns his restaurant has been downgraded from 5 stars to 3 over Health and Safety.

Things go from bad to worse when his former colleague, Celebrity Chef Alistair Skye, arrives demanding the £200,000 that Andy owes him.

A table of racists give Andrea, a black waitress, an incredibly hard time while hostess Beth annoys everyone by promising off-menu food to a table of influencers.

Then, due to a mistake with an order made by Andy, a diner with a nut allergy gets taken away in an ambulance.

A huge row breaks out in the kitchen with one of the sous chefs, Freeman (Ray Panthaki), telling everyone that Andy’s slackness is to blame.

His co-chef, Carly (Vinette Robinson), then quits, telling Andy she can’t take his constant lateness and alcoholism any longer.

Andy’s problems are revealed as lots deeper when, alone in his office, he drinks whiskey from the bottle and snorts drugs. He then calls his ex-wife, promises he’ll go to rehab and to tell their son that he loves him.

Does Andy die at the end of Boiling Point?

But, heading back to the restaurant, Andy collapses. His fate is left unknown when Carly finds him and calls for help.

Director Philip Barantini – who co-wrote the film – hasn’t given his take on what happens to Andy.

However, he did reveal to The Book of Man that it was somewhat based on his own life as a chef.

He said: “I’ve been sober for almost seven years now, but during my time in kitchens, when I was drinking and doing all that, I was in a dark place.

“One of the main reasons why I wanted to make this film the way I did it was to shine a light on society so people can relate to it and see themselves in it, or notice these things in somebody else that they know, and say, ‘Look, are you OK?’.

“The theme of the movie is everybody has two masks, right? The forward-facing mask can be happy and the nicest person in the world.

“But then everybody has the private mask when they go home at night, or in private moments.

“I wanted to show that, so somebody can watch it and know they’re not alone, that everybody is dealing with something at some point in their lives and that there is help out there.”

It’s pretty gritty watching, but it’s almost impossible to take your eyes off of Stephen Graham as Andy literally unravels in real time, in front of you.

The amazing thing about Boiling Point is the film is shot in one single, continuous take.

Boiling Point: What are the critics saying?

Digital Spy, like us, are big fans of Boiling Point, saying: “It’s a compelling and exhausting 90 minutes that barely gives you a moment to breathe, although it will also make you feel very hungry looking at the dishes served up. Things culminate in a heated argument and an ambiguous final shot.”

Mark Kermode, giving the movie four stars for The Guardian, said: “Audaciously filmed in a single take, Philip Barantini’s low-budget drama serves up a brilliant performance from Graham as a chef on the edge.”

The Independent‘s Clarisse Loughrey, also awarding four stars, said: “The film is always on the move, and yet somehow oppressively claustrophobic, as the tension gradually builds to the point of no return suggested by its title.

It’s not just the critics who are loving the film, particularly Stephen Graham’s performance, either.

Viewers have flooded social media with praise for the movie.

“I’d highly recommend boiling point on Netflix. Amazing one shot drama about a night’s service in a high end restaurant. Not just amazing performances all around but an incredible technical achievement,” one viewer gushed on social media.

Another said: “Boiling Point is an absolute triumph, in 1 hr 30 mins it manages to create these incredible, believable characters who you quickly form strong feelings towards, and it’s just non-stop tension. Oh and also *that* scene between the two pastry chefs broke me.”

That scene between the two pastry chefs broke me.

She was referring to a touching scene where a female worker discovered scars on the arms of a young man. She promised him they would get him help. Really heartbreaking.

“Boiling point. (2021) One of the best films I’ve seen in years. Exciting dialogue, a one take film depicting a topic I’ve rarely seen in film. 5 stars tbh,” added another.

Another said: “Watching Boiling Point on Netflix. One of the most stressful films I’ve ever watched but brilliantly written and fantastically acted. Everyone involved with the making of should be absolutely proud of it.”

And someone else posted: “Public Service Announcement! Boiling Point is now on @NetflixUK. Superb restaurant-based thriller, all shot in one take, with a powerhouse of a central performance from Stephen Graham.”

We think that just about sums it up.

Does Andy die at the end of Boiling Point? Leave us a comment and let us know your theory on our Facebook page @EntertainmentDailyFix.