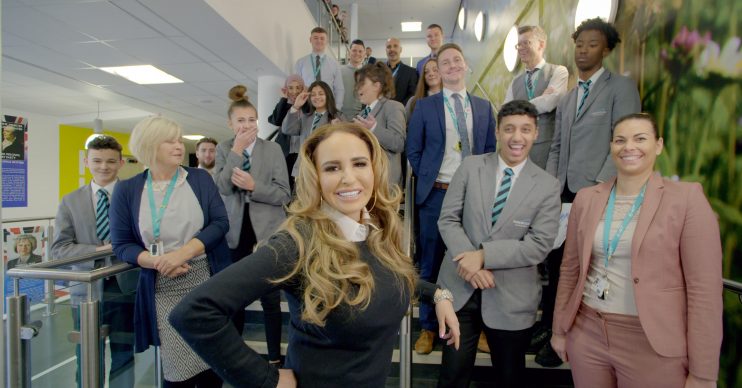 Some are finding it "frustrating" to watch

Channel 4 viewers appear to have turned against documentary series Secret Teacher just two episodes in, with some branding the programme “gimmicky”.

The first episode proved a hit last week, stunning audiences with eye-opening scenes of a lesson packed to bursting point with 60 kids and just one teacher.

Episode two, aired last night (15.08.19), followed successful businesswoman and self-made millionaire Kate Stewart, 36, as she went undercover as a support worker at a school in Sheffield.

Kate, who left school without qualifications as a single mum, now runs her own property business with a multi-million pound turnover.

One boy who was struggling at the school caught her attention. Zain, 15, had been close to being expelled, with support staff member Jackie revealing: “His behaviour last year was so bad that he was so close to not coming back.”

But Kate could see Zain’s “massive” potential. She said on the programme: “I think Zain has personality and spark but it could be channelled the wrong way. He’s either going to be very good or very bad. There is a fine line with Zain – he has massive amounts of potential but he needs to prove he’s good.”

As the episode drew to a close, Kate came clean about her identity and proposed a life-changing opportunity for Zain by offering him a full-time job.

One said: “Programs like #SecretTeacher actually make me quite angry. It highlights the complex issues faced by so many kids in schools, but unfortunately there simply isn’t a magic wand to tackle them. I’m not sure what gimmicky shows like this are trying to prove.”

Another tweeted: “The #SecretTeacher on C4 – what’s that all about??! Watched ep2 earlier… apparently if you’re really bad at school, don’t turn up, underachieve and cause disturbances, a millionaire comes along and gives you a job. At least that’s what I think the moral of the show was?”

A third wrote: #SecretTeacher seems to reward the kids that can’t be [bleeped] and distract others whilst the kids that don’t get noticed or suffer terribly with anxiety issues get ignored.”

Someone else put: #SecretTeacher is very frustrating for me as I have just left school and know how annoying it is to constantly see the layabouts get all the attention and opportunities as if to ‘motivate’ them, when the majority who do the work and want to do well get nothing.”

A fifth tweeted: “I really want to like the idea of the #SecretTeacher, but I feel like the well-behaved kids are being ignored in favour of the ones who make better television. I would also like to see some funding given to the school too so more benefit instead of a ‘select few’.” 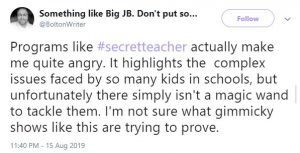 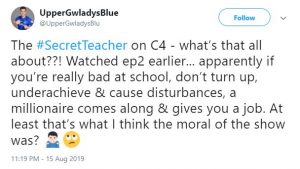 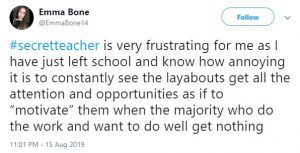 Not everyone was turned off, as one viewer tweeted, “Loving #SecretTeacher”.

Another heaped praise on entrepreneur Kate, tweeting to her: “After watching secret teacher, you are simply amazing! And everything our children are looking for – someone to give them hope and raise their self esteem! You would have been an asset to any school.” 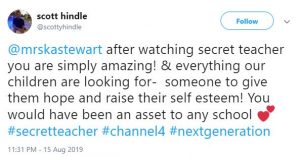 What do you think of Secret Teacher? Leave us a comment on our Facebook page @EntertainmentDailyFix and let us know.