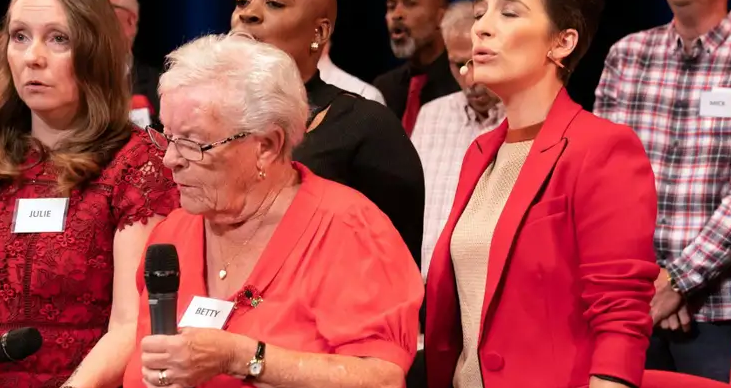 Viewers moved to tears by Our Dementia Choir with Vicky McClure

Viewers have said they were in tears after watching Vicky McClure lead a team of dementia sufferers as they prepare to perform as a choir in front of an audience of 1,000 people.

The Line Of Duty star hosts the BBC One two-part series Our Dementia Choir, which sees if music can help people suffering from some forms of the condition.

McClure discusses her experience of seeing dementia first-hand after caring for her grandmother – “Nona” Iris – who died in 2015.

Read More: Vicky McClure’s nephew is playing her son in Line of Duty

Social media users said they felt inspired after watching the show, which follows the journey of 20 people aged between 31 and 87 from McClure’s home town of Nottingham.

She joins forces with specialists from the fields of medicine, music therapy and performance, with choral director Mark De-Lisser helping to train the group during the first episode.

The presenter wrote: “Dementia choir with @Vicky_McClure on @BBCOne right now is an incredible programme.

“Utterly heartbreaking, in pieces watching but loving the joy it’s bringing these families.”

Viewers were particularly moved by the story of drummer Daniel, diagnosed with a rare form of dementia when he was 30 which meant he could no longer play the instrument.

McClure, who plays DCI Kate Fleming in the Jed Mecurio drama, was in tears as the choir performed for Daniel – the youngest member of the choir – and his partner Jordan.

Davina McCall tweeted her support for the programme, posting a picture of her father who has dementia.

In an earlier post, the presenter also said she was in tears and called the episode “amazing”.

Our Dementia Choir with Vicky McClure continues on BBC One on Thursday May 9.

Did you watch Our Dementia Choir with Vicky McClure last night? Leave us a comment on our Facebook page @EntertainmentDailyFix and let us know what you think.