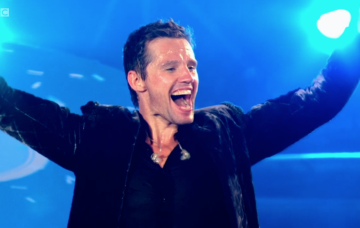 Fans devastated the ex-bandmate chose not to appear

Howard Donald has reached out to Jason Orange after his ex-bandmate was missing from Take That’s 30th anniversary TV reunion.

The 50-year-old singer wrote an emotional message after devastated fans shared their sadness at Jason’s absence.

Speaking on BBC documentary We’ve Come A Long Way, Howard revealed how the 48-year-old’s decision to quit the group in 2014 had “hit him the hardest”.

After the programme aired, he took to Twitter to write: “Hope you all enjoyed watching. It’s a weird one watching myself, don’t tend to to do so but wanted to see how it came across.

“It’s always the Jay bit that gets to me. Really hope he is happy. Thank you to you all for being there for us. See u next year. XX”

Hope you all enjoyed watching.
It’s a weird one watching myself,don’t tend to to do so but wanted to see how it came across. It’s always the jay bit that gets to me. Really hope he is happy.
Thankyou to you all for being there for us. See u next year. XX

All four other past and present members of Take That, including Robbie Williams, were back together reminiscing about their astonishing pop music journey.

Even Jason’s mum Jenny appeared, chatting to the other stars’ mothers about the band’s impact on all of their lives.

Howard said on the show: “I miss Jason. He’s the one I associated with in the band that’s more like me.

“Similar background, grew up in a council house, big family. That’s why it probably hit me harder than anyone else out of the band.”

Mark Owen said: “It was almost worse for me than when Robbie left. There’s a warmth with Jason that was a really lovely part of the band.”

Gary Barlow said: “I think it was one of the lowest parts we’ve had in our group when Jason decided not to be a part anymore.

“It took me a while but at some point you have to go, we’re all adults here, in our 40s, and this guy is really happy about his decision. Who am I to say he’s getting it all wrong?”

He added: “We’re celebrating a long period, and I hope somewhere, wherever he is, he has his own little celebration.”

Agreeing with his ex-bandmates’ views on Jason, Robbie said: “He’s a vital ingredient into the chemistry of this band.

“He’s the older, older brother and I miss him that he’s not here today.”

Jason’s mum Jenny said: “I’m lost without him, really. I still love going to the shows.

“He just wanted to step away from the fame. I still miss him being with the boys.”

Howard recently revealed Jason no longer took his phone calls or emails, despite their close bond in the band.

* Take That: We’ve Come A Long Way is available to watch on BBC iPlayer.

Do you miss Jason in Take That? Leave us a comment on our Facebook page @EntertainmentDailyFix and let us know what you think!