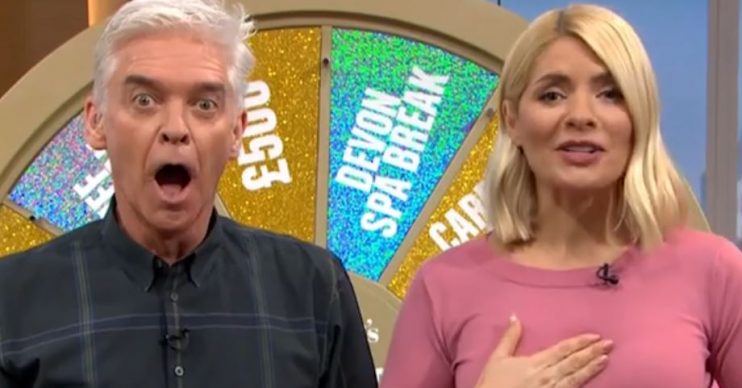 They couldn't believe it

Presenters Phillip Schofield and Holly Willoughby were left stunned on This Morning when a caller during a competition segment admitted they were a doctor in the middle of seeing a patient.

During today’s (February 13 2020) episode, the duo were hosting the programme’s notoriously chaotic Spin To Win game when they got in touch with a contestant called Rhodri.

Read more: This Morning fans convinced woman is ‘fuming’ with husband who surprises her with Valentine’s makeover

The caller, surprised at having gotten through, gasped: “Oh my goodness, I’m Rhodri.”

Phil wondered: “Why did it take you so long to answer the phone?”

“Because I’m a doctor working on the wards in Cardiff,” the caller admitted.

“Oh my god, that’s a very good excuse,” Holly told him. “Did you just take a chance and pick up the phone and say the password? Because obviously you’re not watching.”

“No I’m with a patient, I just walked out,” Rhodri confessed.

Visibly gobsmacked, the presenting duo sprang into action to get the game going, as Holly said: “Right were going to do this really quickly.”

In the end, the doctor narrowly avoided landing a spa break in Cardiff, where he works, to win a trip to Devon – with what appeared to be a helping hand from Phil.

I’m with a patient, I just walked out.

This Morning’s Spin to Win has proven to be a controversial segment since its introduction.

During an episode earlier this month, viewers were fuming when a caller appeared to be let off for cheating, as Phil and Holly allowed them to play on despite seeming to break one major rule.

While the phone was ringing, Phil stood wincing, hoping the caller would answer and use the password, ‘Lime’.

Read more: Phillip Schofield and Holly Willoughby in hysterics as viewer wins holiday to her hometown on This Morning

“Hello?” they seemed to say as they picked up the phone, but Phil, hearing something completely different, shouted, “Yes!” before adding to Holly, “That was lime, wasn’t it?”

They discussed whether or not the caller had said the password until Holly asked for confirmation in her earpiece and was given the go ahead to play on – much to the chagrin of viewers at home.