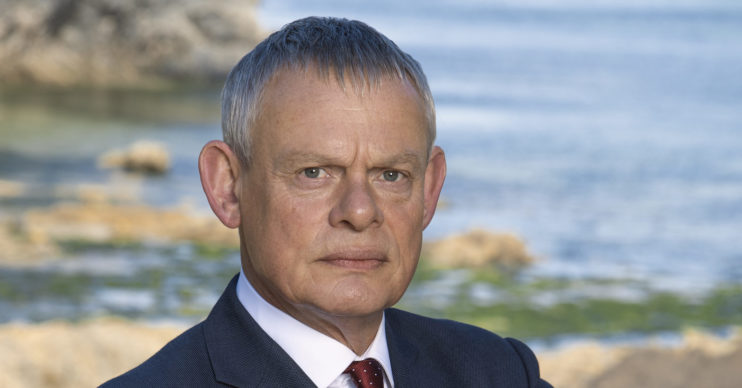 Doc Martin actor Martin Clunes popped up on This Morning this week to talk about his life in lockdown.

A known animal lover, the 58-year-old lives on a sprawling farm in Dorset.

And, while many of us have turned into couch potatoes endlessly snacking to alleviate boredom, Martin has clearly been keeping active.

The beloved telly star appears to have lost a significant amount of weight.

It was noted by many viewers of the daytime show…

“He has lost a lot of weight, like him in Doc Martin, brilliant,” said another.

Someone replied to this: “I thought that. Looking pretty fit!”

The actor, who shot to fame on BBC comedy Men Behaving Badly, has previously spoken about dropping some weight following the 5:2 diet.

This involves fasting for two days a week and eating normally on the other five.

He has said that he now adheres to a 6:1 diet to maintain his trimmer frame.

Martin is also a keen horse rider – and running around after his eight horses keeps him in shape.

He told Ruth Langsford and Eamonn Holmes: “[Lockdown] isn’t too bad for me. I’m getting lots of jobs done, the garden’s never looked better.

“I’m mending bits of fences and gates and things, but the uncertainty isn’t very nice at all.”

Asked if it was a working farm, Martin replied: “Well aspects of it are working but everything makes way for the horses.

“That’s very much the primary thing and what my daughter is studying.”

Doc Martin fans are currently enjoying repeats of the show on Tuesday evenings, filling a hole left by Emmerdale during lockdown.

Is Doc Martin coming back?

All episodes of the ITV favourite are also currently available on subscription service Britbox.

And, despite some confusion over the show’s future, there WILL be a series 10.

The news was confirmed by the show’s director Nigel Cole at the Cornwall Film Festival earlier this year.

He said: “There will be a series ten. We’re working on it. It’s official, we are doing it.”