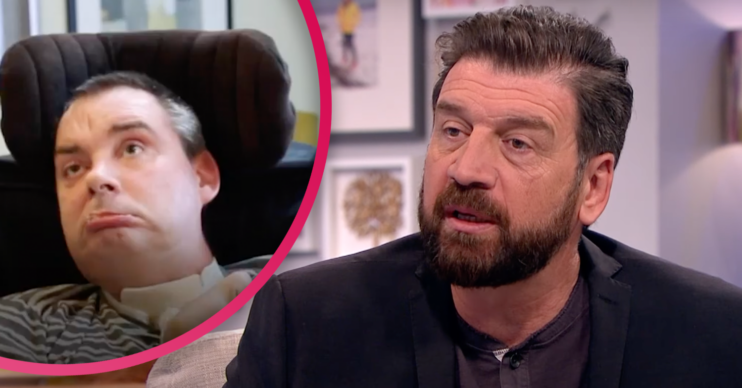 Two years after the death of Simon Dobbin, who appeared on an episode of DIY SOS, five men have been arrested.

Cambridge United supporter Simon was left with permanent brain damage after he was assaulted on his way home from a match in 2015.

As a result, he suffered a stroke and heart failure and spent a year in hospital before returning home.

Nick Knowles and the team stepped in to help convert the home that Simon shared with his family. As a result, his story appeared on the show back in 2017.

Simon was left unable to walk or talk after the attack.

Nick and the DIY SOS team stepped in to help convert Simon’s home so that it could help meet his additional needs.

They converted the lounge into his bedroom and fitted an overhead hoist system and a tilting bed frame. This was to help his wife Nicole care for him.

They also changed the kitchen and garden to help suit his needs.

Meanwhile, more sad news came in 2020, when it was announced that Simon had sadly died.

“The injuries Simon sustained that day did not just change his life, they also changed the lives of Nicole and Emily.

At the time, host Nick Knowles said: “Very sad news. His family put everything aside to care for him. Our sympathies are with them.”

It is with a heavy heart that Cambridge United can confirm we have received the devastating news that Simon Dobbin sadly passed away at home this morning.

Now, two years after his death, five men are in custody after being arrested on suspicion of Simon’s murder.

Detective Superintendent Stephen Jennings, of the Kent and Essex Serious Crime Directorate, said: “Simon’s wife, Nicole, and their daughter Emily have been kept updated on our progress every step of the way.

“Simon was a completely innocent party in the disorder that took place that day. His family have been through an unimaginable time,” he also said.

“The injuries Simon sustained that day did not just change his life, they also changed the lives of Nicole and Emily.

“As a team, we will do everything we possibly can to secure justice for Nicole, Emily and Simon’s wider family and friends,” he also said.

As well as the arrests, police are also speaking to witnesses – they want to gather their accounts of what happened on the day.

At the time, witnesses claimed that more than 20 people attacked Simon and his friends following the football match.