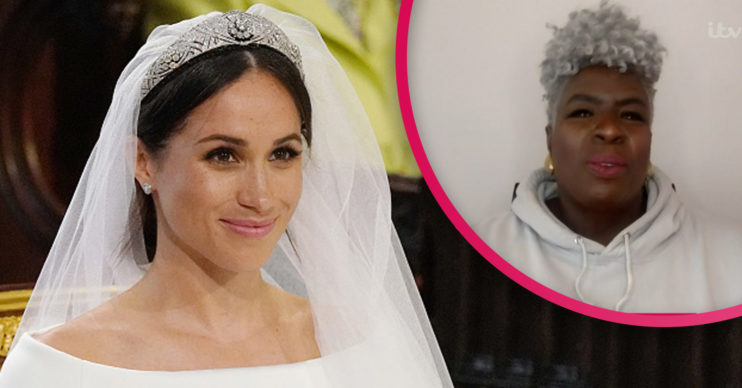 What ‘diva’ Meghan Markle was really like in the lead up to her wedding, according to The Kingdom Choir

Meghan has been dubbed 'Duchess Difficult' by some

Meghan Markle was accused of being difficult and a diva in the lead up to the royal wedding.

Meghan Markle was ‘wonderful’ in lead up to wedding

The Kingdom Choir made headlines around the world after their performance of Stand By Me at Meghan and Prince Harry’s wedding.

In the lead up to the big day, the Duke and Duchess of Sussex met up with the group to discuss exactly what they wanted.

When asked for her impression of Meghan, Karen spilled the beans to host Christine Lampard.

Read more: Meghan Markle latest: Thomas Markle has ‘given up hope’ of reuniting with daughter

She said: “We all we got to meet Meghan Markle and Prince Harry before the wedding and they were absolutely wonderful.

“We met them to talk about the song and the arrangement which was very particular – but they were wonderful.

“They were very down to Earth, really approachable and very friendly. We even heard a little bit of Prince Harry’s voice!”

Meghan Markle is ‘no diva’

Karen disagreed with reports that Meghan had been behaving like a diva in the lead up to the royal wedding.

“We had such a fun time,” she added. “I have to say I didn’t see this person that I hear some people are talking about.

“And. as couples do when they’re about to get married, they like things to be just so – and I think that’s fair enough.

“You have a particular vision for your day and why not?”

Karen continued: “You want it be lovely for the world but actually for each other and I think that song Stand By Me was very special to them.

“And they were completely right about how it sounded and the arrangement because the whole world, it feels like, loved the song.”

When asked about the royal wedding, Karen insisted that The Kingdom Choir weren’t at all nervous about performing in front of the entire world.

Instead, she and the other singer felt “extreme excitement”.

She added: “I remember us singing in the coach all the way from London to Windsor.

“The fact that we were being escorted by police escort, that helped to heighten the excitement.

“When we got to the church, the sun was shinning, there was such an air of anticipation and we bought into that.

“We were not nervous. We were ready.”