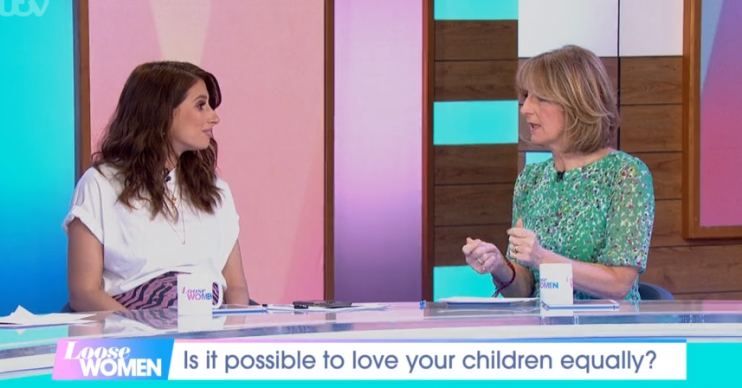 She quickly cleared things up...

Kaye Adams appeared to make a comment about the gender of Stacey Solomon‘s unborn baby before appearing to quickly clear things up.

During Friday’s Loose Women, the panel were discussing whether it’s possible to love your children equally.

Stacey, who has two sons and is expecting her third child, admitted she’s worried she won’t be able to spread her love between three children.

Read more: Pregnant Stacey Solomon tears up over fear of not being able to ‘spread love’ between three kids

The panel spoke about one of Stacey’s recent Instagram photos which showed her walking hand-in-hand with her two boys Zachary, 11, and Leighton, six.

In the post, she told fans about her anxiety about having to spread her love.

Kaye told Stacey on the daytime show: “The next picture is going to be you and the two boys on the other side, then the boys connecting,” appearing to suggest Stacey could be having a boy.

However, she quickly added: “Or I mean the girl, whatever, the children connecting. That’s the other relationship that we don’t appreciate.”

Ent Daily has contacted reps for Loose Women for comment.

Last month, Stacey revealed she and boyfriend Joe Swash know the gender of their baby, but are keeping it secret.

On today’s Loose Women, Stacey said she gets “anxious” about having to share her love with another child.

She said: “I get emotional over a lot of things these days. I was just thinking about this other human coming along and I get really anxious about spreading the love between three people and not just two.

‘I thought about this other human coming along, and I got really anxious about spreading the love between three people.’

Do you worry about trying to love all your children equally like our @StaceySolomon? 💕 pic.twitter.com/3qRdGhOpFO

“I’ve been able to do two for the past several years and I just feel guilty, especially for my youngest. He’s loved being the youngest and still really enjoys being the baby of the family.

“I don’t remember thinking I won’t be able to do two. But this three thing, I think maybe it is the hands thing. I’ve only got two arms.”

Stacey added: “I know it’s totally hormonal and quite irrational and I’ve realised I’m actually over the moon and so excited for the new dynamic to start.”

Stacey and Joe announced in February that they were expecting their first child together.

Stacey has Zachary and Leighton from previous relationships while Joe also has a son, Harry, from a past relationship.

Did you find out your baby’s gender? Leave us a comment on our Facebook page @EntertainmentDailyFix and let us know.