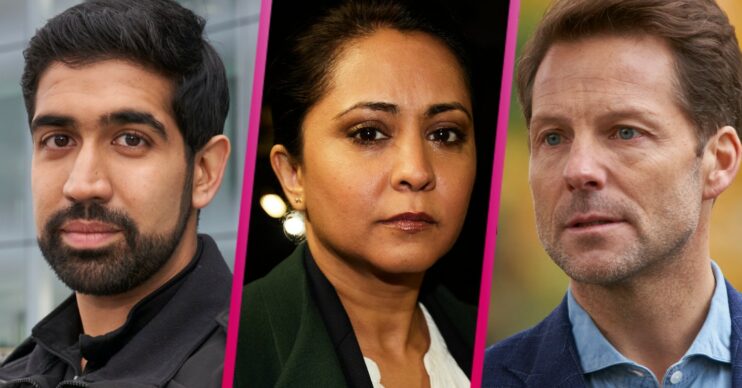 DI Ray episode 3 on ITV1: Questions we have after watching THAT explosive ending

DI Ray continued with episode 3, some heartbreaking scenes and the mother of all twists.

The penultimate instalment of the ITV drama came closer to discovering who killed Imran Aziz – but not close enough.

We still don’t know exactly who’s behind the crime – and nor does DI Rachita Ray, played by Parminder Nagra.

But we have some pretty good suspicions – step forward Rachita’s boyfriend Martyn!

Here are all the burning questions we have after watching episode 3 of DI Ray.

***Warning: spoilers from episode three of DI Ray ahead***

DI Ray episode 3 – Is DCI Martyn Hunter behind it all?

At the end of DI Ray episode 3 (Wednesday May 04 2022), viewers were shocked to see DI Ray and PS Tony Khatri gunned down.

We already suspected DCI Martyn Hunter was a controlling creep…

But now we know he’s a violent, dangerous criminal too.

Well, this does have Jed Mercurio’s fingerprints all over it!

Although we have decided they are the best couple of TV ever – so cute! – Martyn didn’t agree.

He gave the order to hurt them – or Tony Khatri at least – and the gunman shot down both officers.

And who did Martyn give the order to?

None other than Marco/Marcus Tranter – the man linked to the murder of Imran Aziz and the people smuggling.

So does this mean DCI Martyn Hunter is behind everything?

Tragically, PS Tony Khatri was shot several times in the back.

We have to wait until the final episode – on Thursday May 05 2022 – to discover if he will survive.

We’ll be devastated if he dies.

He was fast becoming our fave character.

Is DI Ray based on the true story of Vietnamese lorry deaths in Essex?

The storyline bears a heartbreaking resemblance to a real life tragedy in 2019.

On October 23 of that year, the bodies of 39 Vietnamese people were found in the trailer of an articulated refrigerator lorry in Grays, Essex.

Among the dead were 31 men and eight women.

The trailer had been shipped from the port of Zeebrugge, Belgium, to Purfleet, Essex.

UK police have convicted nine people of crimes related to the incident so far, and a further 19 have been jailed in Belgium.

In episode 2 of DI Ray, viewers saw DI Ray attacked in her own home.

However, in episode 3, she’s told there was “no evidence of an intruder at her house”.

So was it controlling DCI Martyn Hunter trying to scare her into moving in with him?

Or is DI Ray “showing signs of strain” as suggested by her boss DCI Henderson?

In episode 3 of DI Ray, we learnt that Imran Aziz was somehow involved in people trafficking.

But how and why?

DI Ray also discovered that Imran Aziz was acting as an informant for the police on organised crime, and drug smuggling.

We still don’t know who killed Imran and his girlfriend, or why.

But somehow it’s linked to Marco/Marcus Tranter, and dodgy Martyn.

Why is Gemma Whelan’s character DCI Kerry Henderson such a bitch?

We love Gemma Whelan, we really do.

The actress that is.

But her DI Ray character DCI Kerry Henderson is a class A bitch.

Why does she hate DI Ray so much?

DI Ray was accused of bullying in episode 3 of the ITV drama after a few short words with a colleague.

But our eyes are on DCI Henderson as the workplace bully!

What do you think of DI Ray so far? Leave us a comment on our Facebook page @EntertainmentDailyFix.