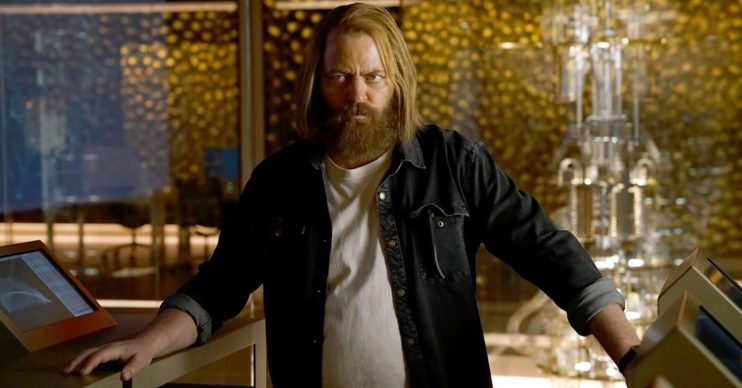 The BBC sci-fi series has raised a lot of questions

Alex Garland’s BBC series Devs has been a huge hit with fans.

The incredible ending has been trending on Twitter after all eight episodes were aired on Hulu.

“#DEVS is such a well-done show. Beautiful ending,” one viewer tweeted.

Another added: “#Devs is phenomenal. What an ending.

“I need to collect myself, then I want to rewatch the entire miniseries again.

“All 8 episodes are now available to binge-watch on Hulu if you haven’t started yet. Please watch it. #DevsFX #FXonHulu.”

But how exactly does Devs end?

Devs isn’t really Devs at all.

The quantum computer is actually called Deus which is the Latin word for God.

Using this super advanced technology, the team at Amaya were able to work out the coding for the universe and look into the future.

READ MORE: What is Devs?

This is how they know Lily (Sonoya Mizuno) will break into the facility and kill Amaya CEO Forest (Nick Offerman).

When Lily is find out, she attempts to make an act of free will and deliberately does not kill Forest.

She hopes her actions prove that the world is not pre-determined after all.

Despite this, they both still die as Stewart (Stephen McKinley Henderson) pushes an emergency button that kills them both.

Does free will exist?

Lily thought she was using free will to make her own choice in the series finale.

However, it turns out, her future was predetermined.

There was nothing she could have done that would have prevented hr death.

Writer Alex explained that these scenes are a reflection of Eve in the Bible.

“Devs is deliberately echoing this, deliberately recreating a scenario where Eve takes the apple from the tree and then is punished by God for her act of free will,” he told Game Spot.

“He’s punishing her for something that was predetermined. And that’s not her fault. In a way that’s his fault, having done it. Or, God didn’t know she was going to eat the apple.

“[Then] it was an act of free will, in which case God is no longer all-knowing and all-powerful, because he didn’t know that that’s what she was going to do.”

After they die, Katie (Allison Pill) is able to resurrect Forest and Lily digitally in a simulation within the Deus machine.

She’s also able to bring back Jamie (Jin Ha) and Sergei (Karl Glusman) in the software, as well as Forest’s late wife and daughter Amaya.

However, only Forest and Lily are aware that the new world they’re now living in isn’t real.

Forest is then reunited with his family.

Meanwhile, Lily is faced with choosing between Jamie and Sergei – she chooses Jamie.

Opening up about the decision, actress Sonoya said: “The machine actually allows her to be with [Jamie] after she’s made those mistakes, after he died. It’s still the opportunity to be with the person.”

What did you think of  Devs? Leave us a comment on our Facebook page @EntertainmentDailyFixand let us know what you think of this story.