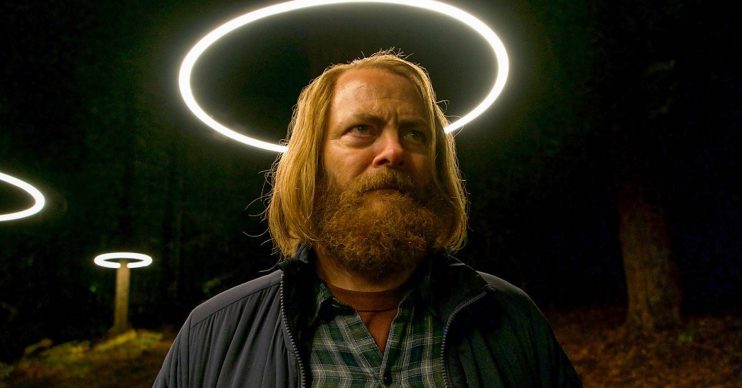 What is Devs about? Disturbing new BBC Two show explained – because it will mess with your head

Alex Garland’s disturbing new sci-fi is guaranteed to leave some fans wondering what Devs is about.

The author’s latest TV series will air its penultimate episode on BBC Two tonight (May 6) but a lot of questions will undoubtedly need answering.

With that in mind, we decided a little breakdown may be of some use.

What is Devs about?

The computer guru works at prestigious tech company Amaya with her boyfriend Sergei (Karl Glusman) – albeit, in different departments.

It’s a huge honour and he doesn’t think twice about accepting the offer – despite not actually knowing what Devs is.

On his first day, Sergei finally learns what Devs does and it terrifies to the point he is physically sick.

After making a run for it, he’s stopped by Fores, who accuses him of betrayal, and he is killed.

Lily realises something isn’t right when Sergei doesn’t come home that night and sounds the alarm at work.

What happens to Sergei?

When Lily talks to Fores, he covers up what happens.

In a bizarre twist, Amaya then show police footage that appears to show Sergei taking his own life.

As far as the cops are concerned, the case is closed.

But Lily refuses to believe the lies and Devs follows that dangerous cat and mouse game that follows.

The name of Amaya’s top-secret division would suggest it’s the development department.

But the truth is more complicated than that.

Writer Alex explained to British GQ: “The really simple idea of determinism is that nothing ever happens that isn’t the result of cause and effect, because that describes the physical universe.

“Because our brains also live in that physical universe, and are subject to the same laws, it removes free will, basically. And there’s a massive amount of evidence for it.”

Alex admitted that he developed concerns over what really happens at Silicone Valley while working on the show.

“You have tech companies that have the money and power of nation states, but they don’t have any real system of checks and balances placed upon them,” he explained.

Although we’re yet to learn the specifics of what Devs does, we do know that their work was terrifying enough to make Sergei literally sick.

Devs continues on BBC Two at 9pm tonight (May 6.)

What did you think of  Devs? Leave us a comment on our Facebook page @EntertainmentDailyFix and let us know what you think of this story.